Davenport Elected into Hall Of Fame 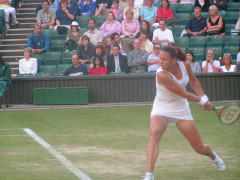 tennnisfame.com: March 3, 2014 Newport, R.I.— Former World No.1 and six-time Grand Slam tournament champion Lindsay Davenport has been elected to receive the highest honor in the sport of tennis—enshrinement in the International Tennis Hall of Fame in July.

Joining Davenport in the Class of 2014 will be 5-time Paralympic medalist Chantal Vandierendonck, who was the first ITF World Champion for wheelchair tennis. Additionally, three individuals have been elected in recognition of their tremendous dedication toward the growth and development of the sport—legendary tennis coach Nick Bollettieri, who has guided 10 players to world No. 1 status; Jane Brown Grimes, who has held executive leadership roles with the WTA, USTA, and the International Tennis Hall of Fame; and British tennis broadcaster and author John Barrett.

Celebrating its 60th anniversary in 2014, the International Tennis Hall of Fame & Museum is a non-profit organization dedicated to preserving the history of tennis and honoring its greatest champions and leaders. The Hall of Fame offers an extensive museum that chronicles the history of the sport and honors the game's greatest legends. Over the past 60 years, the honor of enshrinement in the International Tennis Hall of Fame has been presented to just 235 people representing 20 countries.

“Lindsay Davenport had a lengthy, successful career in which she reached the pinnacle of our sport as a competitor—world No. 1 and a Grand Slam champion. This summer, we look forward to celebrating her many accomplishments and contributions to tennis by presenting her with the sport’s highest honor—enshrinement in the International Tennis Hall of Fame,” commented Hall of Fame President Stan Smith. 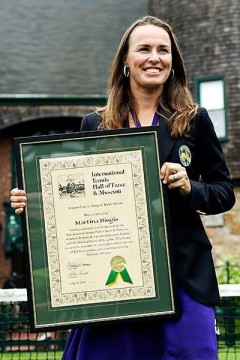 July 14 2013 ITS Staff: Newport, Rhode Island - Martina Hingis of Switzerland was inducted into the Tennis Hall of Fame on Saturday becoming one of the youngest members to be honored. The 32-year-old Swiss Miss was among a distinguished class who were formally inducted at Newport, Rhode Island. Also joining Hingis were Cliff Drysdale, Charlie Pasarell, former Romanian player Ion Tiriac and Australian Thelma Coyne Long.

Hingis, who became the fourth youngest player to be inducted following after Tracy Austin (30), Bjorn Borg (31) and Hana Mandlikova (32), started her tennis career at age 14 and within two years she had won three of the four Grand Slam events, winning the Aussie Open, Wimbledon, and the U.S. Open.

Hingis spent a total of 209 weeks as World No. 1. She also won nine Grand Slam women's doubles titles, winning a calendar year doubles Grand Slam in 1998, and one Grand Slam mixed doubles title. Hingis set a series of "youngest-ever" records before both ankles gave way to injuries forcing her to retire from professional tennis in 2002 at the age of 22. After several surgeries and long recuperations, Hingis returned to the WTA tour in 2006. She then climbed to world number 6 and won three singles titles. In 2007, Hingis announced her retirement from tennis after testing positive for cocaine during Wimbledon. She denied using the drug, but decided not to appeal the imminent ban.

Cliff Drysdale is a former top-ranked professional tennis player of the 1960s and early 1970s who became a well-known tennis announcer. He was one of the ‘Handsome Eight’ -  a group of players signed by Lamar Hunt in 1968 for the newly formed professional World Championship Tennis (WCT) group. Drysdale became President of the Association of Tennis Professionals (ATP) when it was formed by Jack Kramer, Donald Dell, and himself in 1972.

Charlie Pasarell won the NCAA men's singles and doubles titles in 1966, one year after his friend and teammate Arthur Ashe did, playing for UCLA. He reached No.1 in the rankings of American men's players in 1967. In the same year, Pasarell became the first man for over 30 years to win the U.S. National Indoors in successive years; this tournament was the biggest indoor tournament in the world and second only to the U.S. Championships. He has been engaged in the administration of the professional game from the inception of the ATP in 1972 and has been Vice President when he was still playing and until recently on the Board of Directors representing the Americas tournaments.

Ion Tiriac was born in Transylvania and probably the reason why he was nicknamed 'Count Dracula'. Țiriac first appeared on the international sports scene as an ice hockey player on the Romanian national team at the 1964 Winter Olympics. Shortly after that he switched to tennis as his main sport. With fellow Romanian Ilie Năstase he won the men's doubles in the 1970 French Open and reached the Davis Cup finals several times in the 1970s. After his retirement, he served as coach and manager for players such as; Ilie Năstase, Guillermo Vilas, Mary Joe Fernández, Goran Ivanišević and Marat Safin. He managed Boris Becker from 1984 to 1993. In 1998 he became president of the Romanian National Olympic Committee. Țiriac ran major men's events in Germany, including the season-ending championships in Hanover. Although tennis is now a much smaller part of his portfolio and occupies only 5 percent of his time, he has taken particular pleasure and pride in making Madrid Tennis Open a combined men's and women's event with €7.2 million in total prize money.﻿﻿

Thelma Dorothy Coyne Long was one of the female tennis players who dominated Australian tennis from the mid-1930s to the 1950s. At the Australian Championships, Long won singles titles in 1952 and 1954 and was a singles finalist in 1940, 1951, 1955 and 1956. Long became a teaching professional in 1960 and spent many years coaching promising New South Wales junior players. In 1985, her achievements were recognized by Tennis NSW when she was awarded Life Membership of the State Association. On 30 August 2000, Long was awarded the Australian Sports Medal. She was inducted into the Australian Tennis Hall of Fame in a ceremony at Melbourne Park during the Australian Open on Australia Day in 2002.﻿