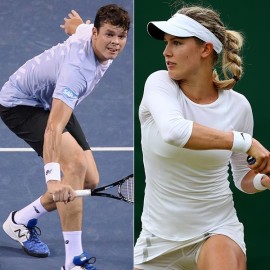 Raonic and Bouchard will soon see action together in Perth. Photo hopmancup.com

Canadian tennis star Milos Raonic has been named Tennis Canada “Male Player of the Year” for the third straight year and the Sportsnet’s “2013 Canadian Athlete of the Year”.

Raonic’s impressive season included leading Canada to a first-ever Davis Cup World Group semi-final appearance in 2013 and reached the finals of the Rogers Cup, a Masters 1000 Series, in Montreal. Raonic also won two ATP World Tour titles in San Jose and Bangkok, as well as a runner-up finish in Tokyo which catapulted him to World No.10 - first ever for a Canadian.

Sportsnet’s 11th annual Athlete of the Year award was selected on by a panel of contributors from TV, radio, web and magazine platforms. In honor of the award, Sportsnet is donating $10,000 to Raonic’s charity of choice. 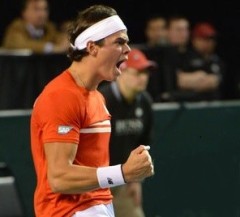 Raonic is also up for nomination for the Lou Marsh Award which is given to Canada’s best athlete. The winner will be announced in December by a panel of journalists. He would be the first tennis player if he wins the award.

“It’s a great feeling. There’s an aura around Canadian athletes,” said Raonic. “Whether it’s in the NBA, college sports, figure skating or hockey, there’s a bit more of a spotlight, and I think it’s special to be part of that and to receive this award for 2013 is an honour.” 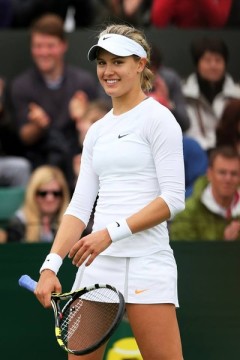 “It didn't take long for the genie to come out of the bottle,” wrote WTA tennis.

Montreal’s Eugenie Bouchard was named Tennis Canada’s Female Player of the Year with an impressive launch of her first full season of her young professional career. She was also voted “Newcomer of the Year” by the WTA Women’s Tour and Canada's "Breakout Athlete Of The Year" by Sportsnet Magazine.

After becoming the first Canadian to win a junior Grand Slam singles title at Wimbledon last year, 19-year-old Eugenie Bouchard reached a WTA Tour ranking of World No.32 from No.144. She reached her first WTA final at Osaka in October while posting victories over four Top 15 players during the year.

Bouchard made her first move during a WTA Premier event in Charleston last April by reaching the quarter-finals after going through the qualifying rounds. In the tournament, she upset former U.S. Open champion and World No.9 Samantha Stosur and defeated Britain’s lefty rising young star Laura Robson

Eugenie played the Internationaux de Strasbourg, where she made a big impression by reaching the   semi-finals defeating veterans Silvia Soler-Espinosa, Camila Giorgi and Anna Tatishvili all in straight sets, but lost to France’s Alizé Cornet in three sets.

Bouchard appeared in her first Grand slam main draw at the French Open, where she beat Tsvetana Pironkova in straight sets but lost in the second round to then defending champion and World No. 2 Maria Sharapova. At Wimbledon, she upended World No. 12 and former No. 1 Ana Ivanovic in straight sets on Centre Court. She was beaten in the third round by Spaniard Carla Suárez Navarro.

At the Premier 5 Toray Pan Pacific Open, Bouchard reached her fourth quarter-finals with consecutive victories over Mónica Puig, No. 9 seed Sloane Stephens, and former World No. 1 Jelena Janković, before she was stopped by Venus Williams in three sets 3–6, 7–6(4), 3–6.

“It’s great to be recognized with these awards for the first time,” Bouchard said. “2013 was a great season for me with so many firsts and so many highlights that I will always remember. I learned a lot in my first full year on the Tour. I’m working really hard in my off-season and can’t wait for next year.”