Young Athlete Inspiration of the Year 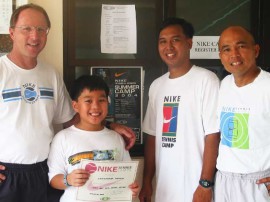 "Nah! Let’s throw some football this time,” Chris answers. “It’s getting dark and besides I’m hungry”.

“Okay, I won’t ask you to play tennis with me and the ladies tomorrow if you play another game,” I suggested.  “Is that a deal?”

“Deal.” This time the game was tight and I lost only by a bucket. The freshman from North Valley Regional Old Tappan High School seemed to have given me an edge (or a handicap) by scoring his points only from long-range a’la Dirk Nowitzki, referrring to a member of the Dallas Mavericks who was to play game 6 of the NBA finals that night.

It would have been another rout if Chris had mixed his moves in the paint using his big-boned 210-pound, 5-foot-9 body against my 155/5-6 frame. As a former full-time athlete, I have kept in shape and thought could still use my agility and fitness against him, but to no-avail.

Chris’ shooting skills are fundamentally sound. He has a nice stroke and fluid release of the ball, thanks to the basketball clinic he attended last year.

“Good playing Chris, you have a pretty good game,” I said.

“I know,” says Chris while dribbling.

“Please don’t respond that way, just say thanks the next time somebody says something nice about your game,” I followed.

"Are you going to play another violin recital piece for us tonight?” I asked while we were leaving the beautiful Highfield recreation park only a few blocks from his home. I noticed he seemed to know everyone in the neighborhood calling them by their first names. “I like the Rieding piece, Concerto in B minor you played last night.”

“Nope not tonight Tito (uncle), I’m too hungry and still have school tomorrow”. Chris had a week left before the summer holidays and he intended to spend more time at the park to work on his game with his buddies. He’s become a ‘gym rat’ or a ‘park squirrel’ as I like to call myself too.

His passion for sports seem to have provided him a nice little confidence boost.  A big leap when he attended our Nike Tennis Camp as an eight year old in 2003. Lucky kid, I thought, he feels so much at home in this beautiful neighborhood.﻿

Just over a year ago, in 2010, Chris and his younger brother Camillo were members of the Robert Frost Middle School Orchestra near Washington D.C. where their dad works as a foreign service officer.

The family had to move back to New Jersey when his father was re-assigned to the United Nations in New York City. Chris' mom made sure he continued with his weekly violin lessons.

Out of curiosity, I asked why he didn’t play for his school basketball team. He kept mum.  I found out later from his mom that he was taken out because he couldn’t stand losing and ended up blaming his teammates every time the team came-up short. He subsequently joined the track and field team.

Later that evening, we were both watching game 6 of the NBA finals between Miami Heat and the Dallas Mavericks. Chris was pulling for Lebron and company while I have always followed Jason Kidd, and now also Nowitzki, and JJ Barea.

I especially liked them due to the fact that they all played tennis and were into multiple sports as kids. Kidd plays class A level, Barea was a an 12-under junior tennis champion growing up in Puerto Rico while Nowitzki played the Bundesliga Junioren Tennis (German League junior tennis) until he was sixteen, before they both chose basketball as their chosen career.

Chris was getting edgy by the second quarter when the Mavs pulled away by double digit points. Chris couldn’t stand the excitement seeing his team struggle. He left for his room and didn’t come back to watch the rest of the game.﻿ 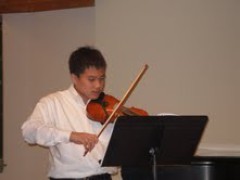 He competed in the Shot-Put Event where he qualified, then subsequently placed fifth while throwing a personal best 33-feet, 2 inches, finishing ahead of other participants from bigger schools in the county.

I could not be more proud. In today’s youth world, Chris would be considered as an above average-regular kid getting along fine with school work, sports, music, and family life while staying out of mischief, right?

Well, he’s more than that. He is an overachiever and a champion in my book. Chris has Asperger Syndrome, an autism spectrum disorder which affects 1 out of 100 children in America. It is a type of pervasive development disorder (PDD) involving delays in the development of many basic skills including having difficulty socializing with others, communicating, and use of imagination.

According to several medical journals, children with Asperger's syndrome typically function better than those with autism, and in Chris’ case, he has the mildest and highest functioning case in the Autism spectrum.

Estimates suggest Asperger's syndrome affects from 0.024% to 0.36% of children. It is more common in males than in females, and usually is first diagnosed in children between the ages of 2 and 6 years.

Affected children like Chris can also be exceptionally talented or skilled in a particular area, such as music or math or on their area of interest such as sports. This is where the diligence of his parents and the support of facilitators within Chris’ community are commendable.

Well-designed programs focused on healthy development, integrated with other community level interventions, and involving parents, teachers and peers, can positively affect the lives of children with disability like Chris.

Chris is supposed to have limited interests and have problems with bio-motor skills like being clumsy and awkward. However, his interests in multiple sports, music and making friends have shown he has overcome these challenges. Chris’ achievement in the shot put competition last May is phenomenal as well as inspirational.

Award winning columnist J.C. Baumuller who has been covering the local high school sports scene since 2002, went to Chris' school last May to interview a coach. Instead he "walked in to a better story". Baumuller, also a sports editor, writes positive accomplishment on and off the fields and most importantly on family values. Read his  article on northjersey.com. 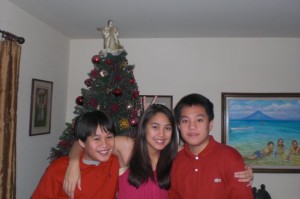 Chris at right with sibs Camillo and Clarissa in 2009, Washington DC.

Participation in sport, recreation and play is valuable in empowering children with disabilities and teaching them key life skills. Sport is an important channel for reaching and engaging young people like Chris in their own development. It can help them become active participants in decision-making, express their own views freely and build self-esteem.

In these cases participation in sport activities alone, however, will not necessarily deliver the benefits. If programs are overly focused on competition and winning at all costs, or if it fails to place the healthy development of children and youth at the center of the experience, it can create negative outcomes.  These negative experiences can also undermine the gains acquired over the years resulting in low self-esteem and unhealthy behavior.

The positive environment Chris belong to has struck a good balance. His parents, his special mentors - on and off the field - administrators, coaches in his school have integrated physical education and sport experiences during school days. They have made sport accessible to children like Chris regardless of their physical ability, gender, socio-economic or ethno-cultural background.

This integration can build on children’s early experiences by ensuring children develop their physical and motor capacities to lead active, healthy lives, and most importantly improving children’s relaxation, concentration and mood state in school — helping them focus and learn. 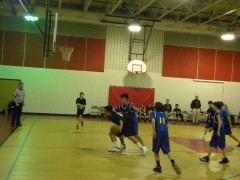 Chris in Action in Virginia

To raise awareness about the contributions of children with disabilities that can make in their communities, and to help build more inclusive societies, International Tennis School has chosen Christopher Sorreta as our “Young Athlete Inspiration of the Year”.