Reuters December 17 2013 - Below is a top ten list of athletes with the largest earnings lead by golf's Tiger Woods and tennis's Roger Federer: 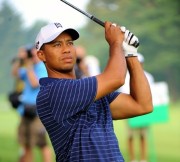 Tiger rediscovered his killer instinct in 2013, surging back to the top of the world rankings after a blistering start to the season when he won five of his first 11 events. Although he failed to add to his haul of 14 major victories, his off-course income perked up, according to the Forbes annual sporting survey, thanks to sponsorship bonuses with Nike and Rolex tied to success. He also collected sizeable appearance fees for competing in Abu Dhabi, China, Malaysia and Turkey.

He slipped down the rankings and suffered his leanest season since 2001 but when it comes to endorsements Federer remains one of sport's most bankable assets. The 17-times grand slam winner's reflexes may have slowed and the picture-perfect backhand has lost its bite but he retains an impressive portfolio of sponsors including deals with Nike and Rolex.

A 15-times All-Star, Bryant's $28 million salary made him the highest-paid player in the NBA in the 2012-13 season and the future Hall of Famer signed a two-year contract extension with the Los Angeles Lakers in November.

The man nicknamed "King James" crowned a memorable 2013 with his second NBA title, putting in a regal 37-point performance in the decisive game of the finals to sink the San Antonio Spurs.

Having scooped a fourth Most Valuable Player award, it comes as no surprise that he is the sport's biggest endorsement attraction, according to Forbes, thanks to deals with Nike, McDonald's and Coca-Cola among others.

With six Pro Bowl selections and a Super Bowl title to his credit since joining the New Orleans Saints in 2006, the quarterback commands a salary befitting his status as one of the NFL's most successful players. Gifted with a strong arm and outstanding vision, Brees has endorsement deals with companies including Nike, Procter & Gamble and Verizon Wireless.

The three-times Pro Bowler and Super Bowl Most Valuable Player in 2011 signed a five-year, $110 million deal in April that made him the highest-paid player in the NFL. A broken collarbone in November, however, meant he suffered a painful end to 2013.

Nicknamed "Phil the Thrill", Mickelson clinched his fifth major title in commanding fashion in 2013, winning the British Open with a scintillating five-under 66 in the final round. One of the biggest draw cards in the game, capable of driving up television ratings almost single-handedly, he earns more than $40 million annually from endorsement partners.

The world's most marketable footballer called time on a career that combined glitz and glamour with some sparkling silverware in 2013, signing off with a league title at Paris St Germain. Endorsements make up the bulk of his earnings and his bankability is reflected in the Forbes rich list as he tops shining lights like Lionel Messi and Cristiano Ronaldo.

This could be the year that Ronaldo finally steps out of the shadows of Lionel Messi after a stunning hat-trick performance helped send Portugal to the World Cup finals and made him favourite to win the World Player of the Year title. Four years of playing second fiddle to the Argentine for the coveted Ballon D'Or has not constrained his earning power, however, with nearly half of his $44 million earnings coming from endorsements.

Having won the accolade for the best football player on the planet since 2009, Messi has already guaranteed his place among the sport's pantheon of greats. After smashing several goalscoring records in 2012, this year has rung alarm bells as he has suffered significant injury problems for the first time in his career. - Reuters, December 17, 2013.