Fort Battad: 'Man at the Center'

Garland, Texas - “Hey Jolene, you need to be more aggressive on your volleys, put them away,” shouts Fort Battad referring to the sixteen year old varsity tennis player from Naaman High School who regularly trains at the Jack Coleman Tennis Center.

Turning to the other direction, he confides to his elite coach Jos Deguchi who is working out a dozen youths, “Make them work Coach, they need to hit more overheads today.” Fort is making sure everyone is busy before he leaves to buy windbreaker nets for an upcoming event.

Since September 2002 the City of Garland under the administration of then-Mayor Dr. Bob Day, has partnered with the former Philippine champion and US scholar-athlete to operate the lighted 13-court public tennis facility located at the Rick Oden Park on West Miller Road.

Managing the center may take a lot of Fort’s time and energy but putting together a series of tennis programs and year-round events for all ages definitely gives the 52-year old Battad a rewarding sense of solidarity with the community he serves.

“The beauty about this world-class facility is it’s in a community setting for a fraction of the cost of country club tennis courts,” says the former Oklahoma City University number one player. “One can enjoy a tennis game on a daily basis without monthly club dues. The city’s commitment to park maintenance is fantastic, and it’s almost for free.”

Free but not cheap. The city is committed to providing their residents and visitors the best service making sure taxpayers are seeing where and how their hard-earned money is spent. The city’s mission highlights the importance of all neighborhood stakeholders working together to continue making Garland the City of Choice, a program spearheaded by current Mayor Ron Jones. 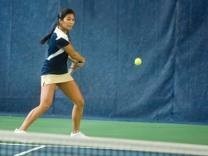 The tennis center is under the Parks & Recreation Department responsible for Garland's 2,400-acre park system of parklands, recreation centers, swimming pools, and other recreational facilities.

“First and foremost, we must cater to the public’s needs and they must feel that they also own this place – this is where they belong and it belongs to them," says Fort as he reflects on his pride and dedication for the center.

There are about a hundred more tennis courts located around the city and Fort is eyeing to put more events and programs in the near future. Fort’s business arrangement with the city is a win-win situation. The city of Garland gives Fort the mandate to run his teaching programs utilizing all available courts and equipment with the former receiving a lesser percentage share of the proceeds.

Conversely, the city helps maintain the courts while Fort manages the center but the city receives the majority share of the revenue from rent. It’s a creative way for the city to generate revenues without paying salaries to professionals while providing a world-class environment for citizens.

Even without tennis revenues, the city has already met its goals in fighting against obesity, crime, addiction, juvenile delinquency and the likes, which end up costing taxpayers more if programs and facilities were unavailable.

Grateful Dads enjoying the opportunity to spend time with their tennis tots at the facility.

Due to Fort’s efforts and the city’s support, the tennis center is currently bustling with players of all ages and all skill levels – men, women, and young alike – between ages 4 and 90 years old. Although interested children start out as recreational players, some have developed into competitive players. Several men’s and ladies’ league teams have over-achieved representing Garland district to several National events.

Juniors who play for high school teams have also achieved academic successes. Several students have been awarded full-athletic scholarship by colleges. “I was looking for a place for my children to have a safe sporting experience, the center definitely met the requirements”, says Joselynne Manlapaz, a single-mom and a mother of two, who for several years have volunteered to help Fort run its day to day operation.

Jocelyn’s teenage daughter and son - Jolene and John respectively – spent their childhood days in the center. “With year-round program in place, both of my kids have stayed out of mischief and focus well on school work”, Joselynne adds.

The center is open summer, spring, winter and fall 24/7. Fort’s achievement is bringing a “welcome feel” to the center. Operating with a volunteer staff, the son of a Philippine university president manages to provide programs that help develop skills and promote the value of community sports and family life.

Fort not only is instrumental in polishing everyone's tennis game but he also plays the role of big brother, Mr. Mom, doubles partner, sponsor, and baby sitter to many of the youths who have come and gone over the past seven years since he was installed by the city to run the center. A man of a few words, the result-oriented former tour-player likes to use the old tennis adage “let your racket do the talking”.

Fort Battad’s philosophy is simple. “The inherent activity of tennis is an art that imitates life itself. The game has already a lot to offer – the challenge, the fun, the competition and the ambience it creates when people are enjoying themselves. So I make sure all the courts are maintained well, give them a home-feel experience, and of course, our presence," explains the multi-talented former scholar-athlete.

In 1978, Fort was awarded a full-athletic scholarship at OCU. Notable team members where Australian Davis Cupper John Fitzgerald who went on to win the Grand Slam of Doubles (Wimbledon, French, US and Australian Opens) in the 80’s. It also included his doubles partner John McCurdy, world ATP Tour ranked no. 70, and Canada’s No.1 Nick Mohtadi, also a Wimbledon Mixed Doubles participant and now a successful doctor of medicine in Canada. Fort played No.1 for OCU in his senior year.

Although the lure of pro tennis was beckoning, Fort decided to complete his business management degree and focus on teaching and program development. The former Oak Cliff Club Head Pro has turned the center into a popular tennis destination. The facility also offers international standard training programs starting at $8.00, almost a third of what private clubs are charging.

Keeping the end-users rate at a minimum cost is a challenge but Fort has been able to use pedigreed volunteers to serve under his administration. The personal monetary profits Fort derive from operations are usually spent back on maintaining the “home atmosphere” at the center.

“As kids, we were never raised to be materialistic by my parents”, says Fort, the son of Dr. Fortunato Battad Sr., a career Philippine University president and the former Lina Montemayor, a Home Economics high school educator. “I like the organic way of life where profitable ventures are put back into growth and cultivated back for progress. I guess it’s because I grew up in an agricultural and educational setting where community work for the common good is the core value. In fact, I traveled extensively and received my business degree with barely ten dollars in my pocket. Through the kindness of these institutions, all I had to do was focus on my fitness, tennis and studies and the rest took care of itself," says Fort who was considered the most athletic and fittest player on his high school and collegiate teams – and the most focused as he was able to receive his B.S. Management degree in four years despite a grueling NCAA competition schedule.

“I consider myself very fortunate to have this privilege.” Fort continues, “depending on one’s point of view, we are both in the highest and lowest strata of the health care system and yet the least appreciated. There is an unquantifiable but real effect on people’s well-being having an institution such as this.”

One member of Fort’s teaching staff is Jos Deguchi, who grew-up in Germany focusing on competitive junior players since 2002. During off-court hours, Deguchi volunteers his presence at the pro-shop helping customers with their needs. ‘Ziel, Arbeit, und Geduld’ (goal, work, and patience) the former business investor Deguchi likes to instill in his student’s mind-set.

Together with Fort, the ever-present youth development guru loves to be on the court playing sets against anyone who would challenge them at every opportunity. Lucky for the advanced players who like to hang around the center, they get valuable play time against the masters – gratis.

“I always believed in the public parks system where the programmers and the public both become long-term stakeholders. A commitment I seldom experienced when I was working with private organizations and country clubs,” says Coach Deguchi, who had students receive athletic-scholarship grants from leading universities most notably Texas state champion Kirsten Rafael, now playing for Notre Dame University women’s tennis team.

“It’s a labor of love for anyone to do this for public service,” says Mark Owen Hanna, a 23-year old former scholar-athlete and All-American at Vincennes University in Indiana and who also holds a bachelor’s degree in athletic coaching.

“It’s a unique playing experience unequaled anywhere else in the tennis community. Thanks to the City of Garland and Fort’s commitment, the residents and their families are lucky to have continuing programs.”

Historically, the public parks have been the breeding ground of star-athletes such as Wimbledon Champion Billie Jean King, Zina Garrison and the Williams Sisters, Jimmy Connors, John McEnroe and many more. The recent surge in private tennis academies did not necessarily produce more players or more champions and may have contributed to its decline in the world stage.

Players were basically products of the public parks concept where the all-around athlete is developed at a young age, not sports specific. The availability of nearby baseball fields, basketball courts and swimming pools maintained by the city helps in the total development of future athletes. Those who do not pursue sports later on become productive citizens and maintain life-long excellent health. 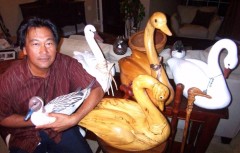 The mentor and the sculptor at his home in Texas.

Although the majority of people know Fort as a tennis coach and a tennis center administrator, very few are aware of his skills on the third dimension.

Fort Battad Jr. is also a craftsman and a sculptor. If the business world of tennis would cease to exist, Fort would continue to make a decent living and could very well be recognized in another genre creating neo-classical and contemporary fine art sculptures, wood-carving and statues.

A visit to his home in Garland, where he lives in a two-story, multi-bedroom house with wife Kathy, Fort’s creative genius manifests itself in a vast collection of avian wood carvings, decorative walking canes, bird houses, and many more articles - all sculpted to life-like perfection.

Fort also designed and installed several wooden-paneled vitrine - an open-shelved cabinet displaying his artifacts also housing their television and stereo sets. Just outside the living room, one will see a neatly constructed pergola serving as a nursery to various species of plants, this too is Fort’s creation.

“If I don’t pull the reins on Fort when he gets going with is creative juices, I am sure he can turn this house looking like an art gallery in St. Paul de Vence,” sums-up Kathy with pride, describing a medieval town in southern France where world-renown artist Pablo Picasso and Marc Chagall once lived.

A famous sculptor was once asked to describe his work after finishing a wooden statue of a horse. He replies, “First I get a block of wood, and then I chip everything away that is not a horse.”

Home > About Us > Latest News