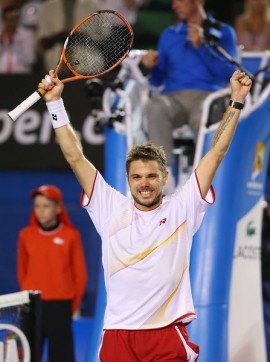 January 23 2014 ITS Michael Duranceau Melbourne - Stanislas Wawrinka is finally through to his first ever Grand Slam final after defeating Tomas Berdych 6-3 6-7(1) 7-6(3) 7-6(4) in the semi-finals of the Australian Open on Thursday evening.

After the three hour and half match, a tired but elated Wawrinka said, "I didn't expect to make a final in a Grand Slam in my career tonight it's happening so I'm really happy. I feel really great.  I have been working really hard for many years trying to improve my game and get some big matches in big stadiums. Now I'm in my first final of a Grand Slam so I can be only be really happy."

The Lausanne-born Swiss, who upset Djokovic on Tuesday in an epic 5-set battle, held his served the entire match facing only one breakpoint against the Czech star whom he broke in the eighth game of the opening set.

Both held their serves for the next three-sets with Wawrinka winning two out three tie-breakers on razor-thin margins. Wawrinka and Berdych tallied 47 and 50 winners; 49 unforced errors each respectively with the Swiss edging Berdych in total points won 143 to 142. Watch highlights below. 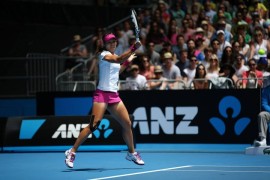 The victory was the Chinese star’s third final appearance in Melbourne, and fourth Grand Slam final in her career winning the French Open in 2011. Li lost to Kim Clijsters in the 2011 final and to two-time Australian Open champion Victoria Azarenka in last year.

Li stormed to a 5-0 lead before Bouchard recovered winning the next two games but eventually dropped the first set in 28 minutes. In the second, Bouchard battled on trading breaks with Li in the first six games before the Wuhan resident took control and closed out the match in one hour and 26 minutes. 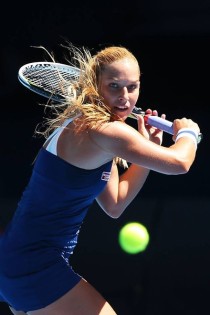 On Saturday's final, Li, turning 32 next month, will meet Dominika Cibulkova who continued her magnificent run this time knocking off fifth seeded Agnieszka Radwanska 6-1 6-2 to avenge a painful loss at the 2013 Apia Sydney finals where she was blanked 0-6 0-6 by the Polish star. Radswanka upset two-time defending champion Victoria Azarenka in the quarter-finals on Wednesday.

The No.20 seed Cibulkova entered her first ever Grand Slam final becoming the first Slovakian to reach a major final. The 24-year old from Bratislava was a semi-finalist at French Open in 2009, quarter-finalist in both the U.S. Open in 2010 and Wimbledon in 2011.

Standing at only 5-foot-3, Cibulkova had upset taller opponents No.3 seed Maria Sharapova in three sets in the fourth round then followed with a 6-3 6-0 thrashing of 2013 6-time WTA Tour level winner No.11 Simona Halep in the quarter-finals. In the first round she beat 2010 French Open champion Francesca Schiavone and No.16 Carla Suarez Navarro in the second round.

Li Na takes down #Bouchard 6-2 6-4 in the semis. She's through to her 3rd #ausopen final! pic.twitter.com/CoS8c7wxES

Down to SF #AusOpen & 8 players left? Who will be holding the champion's trophy this weekend? pic.twitter.com/7JcpXetG8J