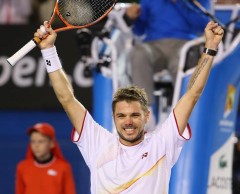 January 26, 2014 ITS Michael Duranceau - Stanislas Wawrinka capped a breakthrough major tournament performance with a four-set victory over World No.1 Rafael Nadal 6-3, 6-2, 3-6, 6-3 in the final of the Australian Open on Sunday.

Wawrinka captured his first Grand Slam trophy to become the first player to win a major outside the “Big Four” Nadal, Novak Djokovic, Andy Murray, and countryman Roger Federer, since Argentine Juan Martin Del Potro did it in 2009 at the U.S. Open.

Nadal, who was bidding for his second Melbourne title and trying to become the only player in history to win all four Grand Slam events at least twice, appeared hobbled by a bad back after the third game of the second set which required an injury time-out.

The Mallorcan continued on, despite being limited with his movements, battled back taking the third set from Wawrinka who in turn lost focus and rhythm with the unexpected drama unfolding on his friend’s side of the court. The eighth-seeded Swiss, however, regained his composure and clinched the match after two hours and 21 minutes. 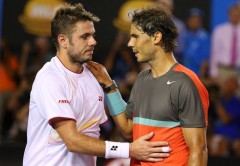 During the trophy presentation, the Lausanne-born Wawrinka, who upset Djokovic on Tuesday in an epic 5-set battle, first paid tribute to Nadal saying, "Rafa, I hope your back will be fine. He's a great guy, a good friend and an amazing champion. It's always a pleasure to play him. Well done on coming back to becoming No.1.

"Last year I had a crazy match and lost it. I was crying a lot after the match. In one year a lot happened. Right now I still don't know if I'm dreaming or not, but we'll see tomorrow morning,” added Wawrinka.

"I'm very happy for Stan, we have a great relationship. It was bad luck what happened to me today, but he really deserved it,” said Nadal when it was his turn to speak.

"It's been an emotional two weeks and I'm very sorry it finished this way. I tried very hard. Last year it was a very tough moment when I didn't have the chance to play here. This year was one of the most emotional tournaments of my career. Thank you very much and I'll see you next year," said Nadal ending his speech to the delight and cheer of the sympathetic full-packed Rod Laver Arena.

Wawrinka, who remains unbeaten in 2014 at 11-0 since ATP Chennai three weeks ago, hit a total of 53 winners and 19 aces. According to the ATP Tour, Wawrinka will now improve his ranking to World No. 3 and Swiss No. 1 on Monday after becoming the 36th man in the Open Era to win his first major title in his maiden final.