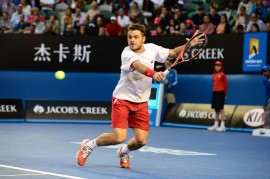 The Lausanne-born Swiss ended Djokovic’s grip on the first Grand Slam of the year having won the title in 2008, 2011, 2012, and 2013. Wawrinka failed on his first two attempts to defeat the Serbian star having been beaten in last year’s Australian Open fourth round clash 12-10 in the fifth set, and again at the 2013 U.S. Open 6-4 in five.

During the post-game interview, the relieved Wawrinka said, "I came on court tonight with a lot of confidence knowing that if I play my best game I always have a chance against him. It's always tough especially against Novak. I was tired and cramping. I was nervous also. Last year was really tough, this year it's a new year.

“After losing two times against him in five sets, I'm really happy to take that one. It's great for me. Novak in  an amazing champion, he never gives up,” said Wawrinka who now face seventh-seeded Tomas Berdych winner over No.3 David Ferrer in four sets 6-1 6-4 2-6 6-4. 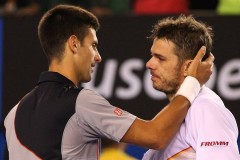 With the victory Wawrinka is now 9-0 for the year having began the 2014 season with a win at the Chennai Open for the second time in his career, defeating Edouard Roger-Vasselin in the final in straight sets.

The six-time Grand Slam champion paid tribute to Wawrinka, "He knows how to play on the big stage now. You could feel that with his game. Unfortunately somebody has to lose in the end. This year was me. I lost to a better player. It's an amazing court probably the court where I had the most excitement in my tennis career.

For Djokovic, the defeat also stopped his winning streak at 28 matches which started after his loss at the U.S. Open final to Rafael Nadal. The World No.2 captured, Beijing, Shanghai, Paris and then finished strongly at the Barclays ATP World Tour Finals in London.

At the Australian Open his 25 match consecutive victories will be very difficult to break for many years to come. Djokovic was bidding to win an Open Era record of four straight Melbourne title. 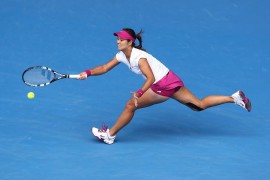 January 21 2014 ITS @Michael Duranceau Melbourne - Since saving a match point against Lucia Safarova in the third round, China’s Li Na’s confidence has skyrocketed resulting in a semi-final spot losing a total of only four games in winning her fourth and quarter-final rounds at the Australian Open at Melbourne Park.

On Sunday Li defeated No.22 Ekaterina Makarova 6-2 6-2 and on Tuesday she trounced No.28 Flavia Penetta of Italy with the same margin to advance to her fourth semi-final appearance in five years. The soon-to-be 31-year old (on Feb.26) dominated the Italian hitting 23 winners and breaking serve five times while dropping her serve only once in the 67-minute match.

Both Li and Penetta were semifinalists at the 2013 U.S. Open and the latter’s first quarter-final appearance here in Melbourne. Li was a semi-finalist to Serena Williams in 2010; finalist to Kim Clijters in 2011, and again finalist to Victoria Azarenka in 2013. Li will now play young Canadian Eugenie Bouchard in the Thursday's semi-finals.

The 19-year old Bouchard reached her maiden Grand Slam semi-final berth after rallying past No.14 Ana Ivanovic 5-7 7-5 6-2 in two hours and 25 minutes. Bouchard, No.30 seed, out-slugged former World No.1 Ivanovic hitting 47 winners to the Serbian's 34 and was able to break Ivanovic's serve twice in the final set before serving out the match.

In men's singles, No.7 seed Tomas Berdych upset No.3 seed David Ferrer 6-1 6-4 2-6 6-4 in over three hours to advance to his first semi-finals at the Australian Open. The 28 year old Czech star was a semi-finalist at French Open and finalist in Wimbledon in 2010, and U.S. Open semi-finalist in 2012. He will next face either defending champion Novak Djokovic or Stanislas Wawrinka who played on Tuesday's night session.

Li Na is the first player through to the semifinals w/ a convincing win over Pennetta 6-2 6-2 #ausopen pic.twitter.com/LBUk2GtsV0