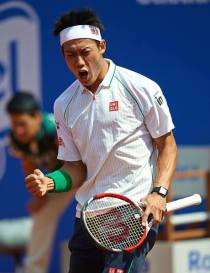 Nishikori fired two aces, rifling 19 winners and saving one of two break point opportunities for the victory, giving him his fifth tour-level crown and second of the year, having won on the indoor hard courts of Memphis (d. Karlovic).

It was the Japanese’s third different title at the ATP World Tour 500 level, following a win on home soil in Tokyo in 2012 (d. Raonic) and in Memphis last year (d. Lopez). The 24 year old was also competing in his second final on clay, after falling to Ryan Sweeting in Houston three years ago.

Nishikori extended his FedEx ATP Head2Head advantage over Giraldo to 5-1 with the win, having most recently defeated the Colombian in straight sets at the BNP Paribas Open last month.

The fourth-seed sprinted to an early lead in the battle of Bradenton, Florida residents, clinching the first set in just 36 minutes after breaking Giraldo in three of his four service games. Patrons at the Real Club de Barcelona-1899, the oldest Spanish tennis club, were brought to their feet as Nishikori continued his surge in the second set, breaking immediately and cruising from there.