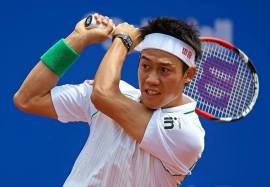 atpworldtour.com April 25, 2014 Barcelona, Spain –  Kei Nishikori has become the first Japanese player to reach the final of the Barcelona Open Banc Sabadell, which was first held in 1953.

He will challenge a red-hot Santiago Giraldo after the Colombian upset Rafael Nadal's conqueror Nicolas Almagro in the second semi-final at the Real Club de Tenis Barcelona-1899, the oldest Spanish tennis club.

The fourth seed defeated ninth seed Ernests Gulbis 6-2, 6-4 in 86 minutes on Saturday for a place in his seventh ATP World Tour title match (4-2 record). The pair had met at Bermuda in 2004, on the ATP Challenger Tour, with Nishikori winning in three sets. Nishikori lifted his fourth trophy in February at the U.S. National Indoor Tennis Championships in Memphis (d. Karlovic). Gulbis had been attempting to reach his sixth final (5-0 record). 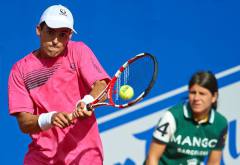 Giraldo, meanwhile, is surging through the month of April, improving to 8-1 following a 7-5, 6-3 victory over Almagro, the 2013 runner-up. He advanced to the semi-finals in Houston earlier this month as well.

The Colombian fired six aces, 19 winners and held Almagro to one break of serve in seven opportunities, emerging victorious in 85 minutes. It was Giraldo's second Top 20 scalp of the week after registering a second round win over No. 3 seed Fabio Fognini.

The 26 year old will contest his second ATP World Tour final after finishing runner-up in Vina del Mar (l. to Robredo) in 2011. Nishikori leads the FedEx ATP Head2Head series 4-1, having most recently prevailed 6-1, 6-3 in Indian Wells earlier this year.