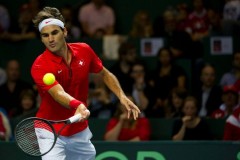 daviscup.com April 6  2014 Geneva, Switzerland - Roger Federer produced another classic performance to see off Andrey Golubev in the fifth rubber 76(0) 62 63 in Geneva to send Switzerland into the Davis Cup by BNP Paribas World Group semifinals for the first time since 2003. Federer had never played a decisive fifth rubber for Switzerland, but was afforded the chance to be the hero by Swiss No. 1 Stanislas Wawrinka after the Australian Open champion battled past Mikhail Kukushkin 67(4) 64 64 64 earlier in the day. Wawrinka was able to shrug off any lingering memories of his five-set Davis Cup defeat to Kukushkin in 2010 to keep alive Switzerland's semifinal hopes. The world No. 3 lost 36 61 64 16 63 to Kukushkin when Kazakhstan pulled off a mighty 5-0 scalp in their World Group play-off three and a half years ago, but with Swiss semifinal hopes on the line Wawrinka stood tall to see off the 56th-ranked Kazakh. Tie Details > Single Recap 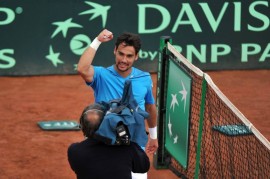 daviscup.com: April 6, 2014 Naples, Italy - Fabio Fognini was the architect of a stunning Italian comeback as the hosts won all six sets on the final day to defeat Great Britain 3-2 and book a place in the semifinals of the Davis Cup by BNP Paribas for the first time since 1998. Fognini produced a masterful performance in front of a raucous home crowd to beat world No. 8 Andy Murray 63 63 64 in two hours and 19 minutes, before Andreas Seppi clinched the tie in the fifth and decisive rubber with a 64 63 64 win against James Ward. Italy now progess to a last-four encounter away to Switzerland, a tie which captain Corrado Barazzutti will relish after the struggles his side have had since last reaching the final 16 years ago. Full Recap > Tie Details 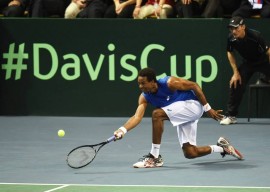 daviscup.com: April 6, 2014 Nancy, France - France succeeded in making the improbable look easy as they recovered a 2-0 deficit in a Davis Cup by BNP Paribas tie for the first time in 18 years against Germany. They did so because of the quality of their players, Jo-Wilfried Tsonga and Gael Monfils looking every inch the top 10 players they used to be and will be again on this evidence. In winning this tie 3-2 Arnaud Clement’s team equalled the achievement of Yannick Noah’s France in 1996 when they came back from 2-0 down to beat Adriano Panatta’s Italy in a World Group semifinal in Nantes. Monfils was the man who secured the victory by ultimately beating Gojowczyk 61 76(0) 62, but there was no doubt that he had been handed the momentum by Tsonga. Although Tsonga insisted he played just as well against Gojowczyk when losing in five sets on Friday, he did look imperious in seeing off the threat of Tobias Kamke 63 62 64 in just one hour and 42 minutes to square the tie. Full article > Tie- Details 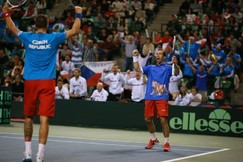 daviscup.com: April 5, 2014 Lukas Rosol and Radek Stepanek of the Czech Republic scored a comprehensive 64 64 64 victory over Japan's Tatsuma Ito and Yasutaka Uchiyama in the doubles on Saturday in their Davis Cup by BNP Paribas quarterfinal in Tokyo. The victory clinched the tie 3-0 for the two-time defending champions, who will now play the winner of the quarterfinal between France and Germany in the semifinals in September. Stepanek and Rosol staked the Czech Republic to a 2-0 lead over Japan in the opening singles on Friday. The pair both earned hardfought victories as the Czechs continue their quest for a third straight Davis Cup title. Stepanek downed Ito 67(5) 76(5) 61 75 in the first match, while Rosol got the better of the unheralded Taro Daniel 64 64 36 46 62 in the second. Both sides are without their top players. Tomas Berdych is out for the Czechs following two tough tournaments in the United States, while Kei Nishikori sidelined due to an injured groin suffered in a quarterfinal victory over Roger Federer in the Sony Open last week in Miami. Full article > Tie Details