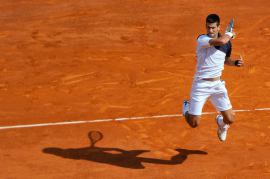 montecarlotennismasters.com: April 17 2014 Monaco – World No. 1 Rafael Nadal became the 11th player in the Open Era to record 300 tour-level clay-court wins on Thursday as he defeated Andreas Seppi 6-1, 6-3 to reach the quarter-finals of the Monte-Carlo Rolex Masters.

The 27-year-old Nadal won his first clay-court match 12 years ago in Mallorca against Ramon Delgado. His victories on clay have seen him capture 43 tour-level titles, including eight Roland Garros crowns.

Novak Djokovic claimed his 12th win in a row on Thursday as he blasted past lucky loser Pablo Carreno Busta 6-0, 6-1 in 47 minutes to reach the quarter-finals. The Serb took only two minutes longer than his 45-minute win over Albert Montanes on Tuesday. The 26-year-old Djokovic is bidding to win his fifth ATP World Tour Masters 1000 title in a row. 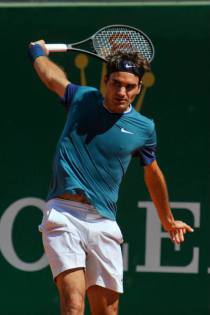 The Swiss Maestro again won under an hour on Thursday. Photo montecarlotennismasters.com

Djokovic ended Rafael Nadal’s eight-year reign at the Monte-Carlo Country Club last year and is looking to become the fifth player to successfully defend his crown here after Bjorn Borg (1980), Thomas Muster (1996), Juan Carlos Ferrero (2003) and Nadal (2006-12). For a place in the semi-finals, Djokovic will face Guillermo Garcia-Lopez, who fought from a set down to upset fifth seed Tomas Berdych 4-6, 6-3, 6-1 in two hours and six minutes.

Roger Federer is yet to spend more than an hour on court at the Monte-Carlo Rolex Masters. Following a 52-minute win over Radek Stepanek on Wednesday, the Swiss advanced to the quarter-finals Thursday in 57 minutes, dismissing Lukas Rosol 6-4, 6-1.

The 32-year-old Federer won 91 per cent of his first serve points and hit 24 winners to 18 unforced errors, breaking Rosol four times to record his second win this season over the Czech. The fourth-seeded Federer earned a quarter-final clash with Jo-Wilfried Tsonga, who earlier fought from a set down to beat Fabio Fognini.