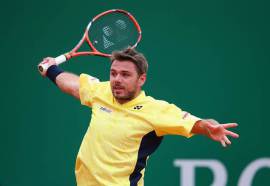 montecarlotennismasters.com: April 20 2014 ATP Staff Monaco – In the first all-Swiss final for 14 years on the ATP World Tour, Stanislas Wawrinka defeated Roger Federer 4-6, 7-6(5), 6-2 in the final of the Monte-Carlo Rolex Masters.

"It's always special to play Roger," said Wawrinka. "We know it's always a strange match, especially being in the final here. He's my best friend on the tour. We respect each other so much. I'm just trying on the court to win the match. Before and after, we are still very good friends. During the match, we just try everything to win. Today I'm really happy to take that one.

"I can see that when mentally I'm there and I'm fighting, I can play tennis, I can beat all the player. I did an amazing job. I'm really happy after winning my first Grand Slam to win a Masters 1000 so quick. I didn't expect to.  When I came here, for me it was more like a test. I knew I was playing good tennis, but I didn't expect to win because the draw was so strong."

It was just Wawrinka’s second win in 15 meetings with Federer (2-13 FedEx ATP Head2Head series). His other victory over Federer also came at the Monte-Carlo Country Club, five years ago.

"Of course, I'm very happy for Stan," said Federer. "It's a huge win for him after winning his first Grand Slam this year, also to win his first Masters 1000. To take the opportunities when they're there, that's key in a tennis player's career. So I'm very happy for him." Read more