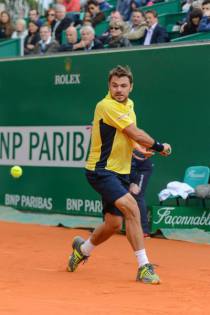 The 32-year-old Federer ended Djokovic’s reign in Monte-Carlo with victory in 75 minutes. Djokovic had dethroned eight-time champion Rafael Nadal in the 2013 final and saw his 13-match winning run come to an end. The Serb, who completed the Indian Wells-Miami double last month, had been chasing an unprecedented fifth successive ATP World Tour Masters 1000 trophy.

After missing the chance to break Djokovic at 4-4 in the first set, Federer found himself in trouble as he faced two set points at 15/40 on serve in the 10th game. The Basel native held on, though, and then clawed his way back from 40/0 down on Djokovic’s serve in the following game to break the Serb and steal the set. With Djokovic hampered by an injured right wrist, which was heavily strapped, Federer took full advantage and broke the Serb twice to prevail. He lost just five points on serve in the second set. 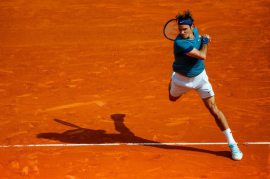 Federer will meet his Davis Cup partner in final. Photo by S.Danna-Realis-Smett montecarlotennismasters.com

In an earlier match, Wawrinka defeated David Ferrer 6-1, 7-6(3) claiming his 100th Masters 1000 win as he set a blockbuster final against three-time finalist Federer. Wawrinka will look to overturn a 1-13 FedEx ATP Head2Head record against his fellow Swiss, but his one win did come on the clay at the Monte-Carlo Country Club in 2009.

Wawrinka has twice before contested an ATP World Tour Masters 1000 final, finishing runner-up in Rome in 2008 (l. to Djokovic) and in Madrid last year (l. to Nadal).

The 29-year-old Wawrinka claimed his first Grand Slam championship at the start of the year at the Australian Open (d. Nadal) and has compiled a 19-3 match record this season, also including victory in Chennai (d. Roger-Vasselin).