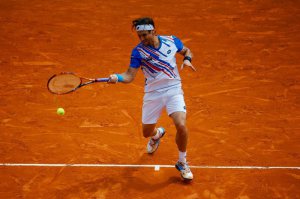 Ferrer caused a tremor on Friday. Photo montecarlotennismasters.com by P.Fitte-Realis-Smett

montecarlotennismasters.com: April 18 2014 Monaco – David Ferrer joined an elite club Friday as he became just the third player in 11 years to defeat Rafael Nadal at the Monte-Carlo Rolex Masters. In the all-Spanish contest, Ferrer produced a gutsy, attacking display to beat eight-time champion Nadal 7-6(1), 6-4 in the quarter-finals.

Ferrer is looking to reach the final at this ATP World Tour Masters 1000 clay-court tournament for the second time, following a runner-up finish to Nadal in 2011, and goes on to face Australian Open champion Stanislas Wawrinka. Ferrer leads their FedEx ATP Head2Head series 7-5, but has lost their past two meetings. The 27-year-old Nadal suffered his earliest loss since his 2003 debut at the Monte-Carlo Country Club, when he was beaten in the third round by Guillermo Coria. From 2005-12, the Mallorcan won eight successive titles, before being dethroned in the final last year by Novak Djokovic. 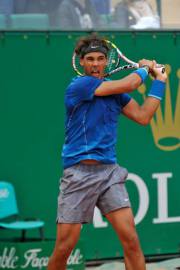 It wasn't a good day for the 8-time champion. Photo montecarlotennismasters.com

World No. 3 Wawrinka reached his first semi-final since winning the Australian Open on Thursday as he defeated Milos Raonic 7-6(5), 6-2. The 29-year-old Wawrinka is looking to win his first ATP World Tour Masters 1000 tournament, having twice been a runner-up – in Rome 2008 and Madrid 2013. He won his first Grand Slam championship in Melbourne in January. Wawrinka recorded his third win in three meetings with Raonic in one hour and 31 minutes.

In other men’s matches, Roger Federer’s patience was tested to the limit as he battled to a 2-6, 7-6(6), 6-1 victory over Jo-Wilfried Tsonga in the quarter-finals of the Monte-Carlo Rolex Masters on Friday.

It took Federer 16 break points before he finally breached Tsonga’s defenses on serve. The decisive move gave him a 2-0 lead in the third set and he went on to break Tsonga once more before claiming victory in two hours and 26 minutes.

The Swiss had been two points from defeat, trailing 5-6, 0/30 at the end of the second set, but four points later had forced a tie-break. He let slip a 6-3 lead, but was given a fourth set point chance courtesy of a Tsonga error and took his chance. For a place in the final of this ATP World Tour Masters 1000 clay-court tournament, Federer will face defending champion Djokovic who survived a scare Friday evening. The Serb rallied from a set down to beat in-form Spaniard Guillermo Garcia-Lopez 4-6, 6-3, 6-1.

Djokovic and Federer will face off for the 34th time and third time this season on Saturday. Federer leads their FedEx ATP Head2Head series 17-16. He beat Djokovic in three sets in the Dubai semi-finals, but it was the Serb who was victorious in the Indian Wells final two weeks later.