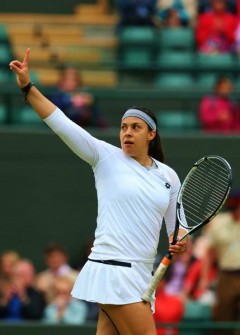 Wimbledon, England – France’s Marion Bartoli made short work of her semi-final opponent in Wimbledon on Thursday demolishing Belgian Kirsten Flipkens 6-1 6-2 to reach her second final at the All-England Tennis Club.

The No.15 seed Bartoli, who lost the 2007 final to Venus Williams, broke the 27-year old Flipkens three times in the first set and twice in the second before clinching the match with an overhead smash.

Bartoli said to BBC after the match, "I just really can't believe it right now. I played so well today and was feeling so great. I was seeing the ball like a soccer ball. She hits a lot of slice, so I knew I needed to be sharp on my footwork. Everything was just working so perfectly.

"Playing like that on Centre Court at Wimbledon was just an amazing feeling for me. I just want to congratulate Kristen for a fantastic Wimbledon," she said. "I think she was a bit injured today. She deserves a lot of respect.” 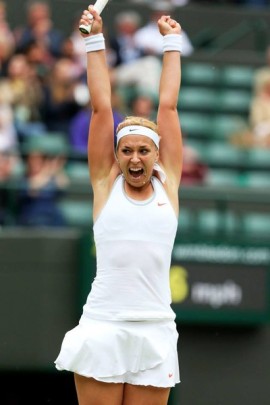 Bartoli will now face No.23 seed Sabine Lisicki who became the first German woman in 14 years to reach a Grand Slam final when she upset  Poland's No.4 seed Agnieszka Radwanska 6-4 2-6 9-7 in a thrilling marathon semi-final at Centre Court that lasted two hours and 18 minutes.

Lisicki came back from 0-3 down in the final set before rallying back to clinch her first career major tournament finals appearance. The last German ladies player to reach Wimbledon final, and a Grand Slam final, was Steffi Graf who lost to American Lindsey Davenport in 1999. Graf won the 1999 French Open a month earlier beating Swiss Miss Martina Hingis.

After the match, Lisicki, who reached  the semis here in 2011, said, "It's unbelievable. The last few games were so exciting. We were both fighting and it was a battle, even when I was down 3-0 in the third set, I still believed I could win no matter what the score was.”