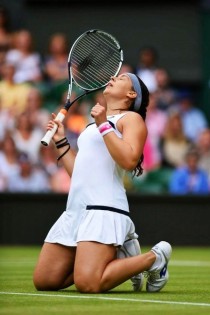 Marion Bartoli, the nearly girl of the 2007 Championships, finally realised the dream she first had as a six-year-old by winning the Ladies' Singles title on Centre Court today. Her 6-1, 6-4 victory over Sabine Lisicki, while thoroughly deserved, was considerably eased by a performance of abysmal tennis by Lisicki until late in the second set.

At 6-1, 5-1 Bartoli had three match points, a crisis which finally stirred her German opponent into a late, but eventually vain, rally. As she hammered down an ace on her fourth match point at 5-4, the 28-year-old French woman dropped her racket, fell to her knees and then rose to embrace her opponent at the net before setting off on the climb to the box occupied by her team, which included the only other French woman to have won Wimbledon in the Open era, Amelie Mauresmo.

There was a special hug for her father, Dr Walter Bartoli, who had been her coach from her first days as a professional until last year, when they jointly decided that if she was to win a Grand Slam, Marion needed fresh guidance. And so it came to pass! 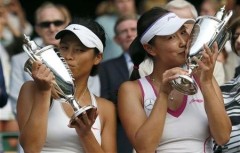 She had lost the 2007 Wimbledon final to Venus Williams after causing a sensation by eliminating the top seed Justine Henin in the semi-finals, but here was belated and sweet revenge for that disappointment. With the Royal Box graced by the presence of so many great ladies' champions, from Billie Jean King onwards, Bartoli showed the determination and skill which makes such champions.

After successive double-faults had cost Bartoli her serve in the opening game, she took the match to Lisicki, attacking her on both flanks and raising a clenched fist time and again as the set went rapidly her way. She had had her slices of luck by not having to face an opponent seeded in the top 10, the first Wimbledon winner to do so in the Open era, but did not drop a set in the entire fortnight and finally, in her 47th Grand Slam, won her first major title. Full article 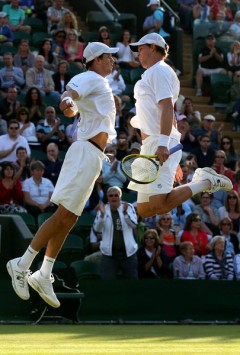 atpworldtour.com: July 06 2013 - Bob Bryan and Mike Bryan achieved a historic “Bryan Bros. Slam” on Saturday as they won their 15th Grand Slam championship at Wimbledon. The 35-year-old twins became the first team to hold all four major titles and the Olympic gold medal as they defeated Ivan Dodig and Marcelo Melo 3-6, 6-3, 6-4, 6-4 at The Championships. Having won the first three major championships of the season, the Bryans also have the chance to become the first team in the Open Era to win the calendar Grand Slam. Not since Ken McGregor and Frank Sedgman in 1951 has a team won all four Grand Slams in a season.

The Bryans won a record-breaking 13th major title with victory at the Australian Open in January (d. Haase/Sijsling) and followed with success at Roland Garros last month (d. Llodra/Mahut). Last year they went on a tear during the summer, winning gold at the London 2012 Olympics (d. Llodra/Tsonga) and triumphing at the US Open (d. Paes/Stepanek). The Bryans won their 91st team title and ninth of the season. They came into The Championships on a wave of momentum and have won 24 matches in a row. Since finishing runners-up in the Monte-Carlo final in April (l. to Benneteau/Zimonjic), they have swept to five straight titles in Madrid (d. Peya/Soares), Rome (d. Bhupathi/Bopanna), Roland Garros, The Queen’s Club (d. Peya/Soares) and finally at Wimbledon. Full article