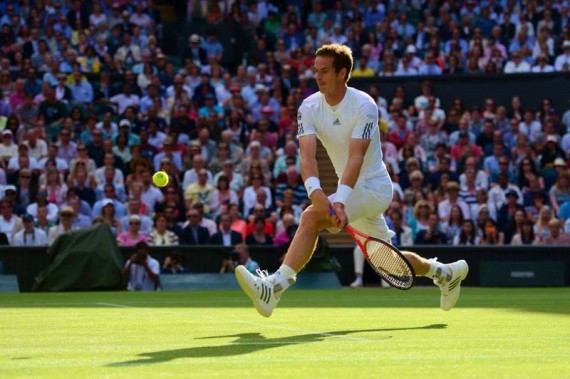 July 07 2013: ITS Staff: Wimbledon England - Andy Murray defeated Novak Djokovic with a 6-4 7-5 6-4 victory to win the Wimbledon singles final on Sunday. The No. 2-seed Scot becomes the first British man since Fred Perry in 1936 to win the title at Wimbledon.

Meeting in a Grand Slam final for the fourth time, both players traded breaks of serve and elicited shrieks from the famed Centre Court partisan crowd through-out three hour and nine minute match. After winning the 59-minute first set, Murray fell behind 4-1 in the second before reeling off eight consecutive games to lead 2-sets to none and 2-0 in the third set.

The 2011 Wimbledon champion Djokovic, however, battled back and was able to break Murray’s momentum turning the game around with four straight games of his own to lead 4-2 - only to let Murray rally again to clinch the historic victory on the fifth championship point.

During the trophy presentation, Murray needled the elated crowd, “I hope you guys enjoyed it. I tried my best. It feels slightly different to last year. Last year was one of the toughest moments of my career.

"It's one of my biggest wins of my career. It was a tough match and it was just an unbelievably long final game with three match points, and I don't know how came through, I'm just so glad. I understand how much everyone wanted to see a British winner at Wimbledon. I tried my best. I've played Novak many times. He's going to go down as one of the biggest fighters. That made it extra tough and I just managed to squeeze through in the end," added the Dunblane-native.

The 26-year old Murray was the runner-up to Roger Federer at Wimbledon last year, then after a few weeks he defeated Federer to win a London Olympics gold medal at the All England Club, then followed up with his first Grand Slam crown in September at the U.S.Open at Flushing Meadow in New York. 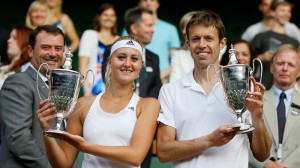 The French-Canadian pair, who was finalist at the French Open last month, saved two match points in the 2-hour match attended by newly crowned Wimbledon Ladies Singles champion Marion Bartoli. It was a diappointing loss for Raymond who was trying to win back-to-back titles after winning last year with Mike Bryan.

After the match, Nestor heaped praise on his 20-year old partner Mladenovic  saying, "I'm fortunate to play with someone that can more than do her share. She's a great player. She's going to be one of the top singles players eventually. Right now I'm catching her while she's maybe not winning four or five matches in singles. She's winning two or three, so hopefully that will change for her. Right now, you know, she's focusing on doubles and mixed. I think that will change one day. I caught her at the right time."