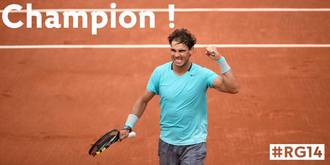 World No.1 ranking on the table for Sunday's blockbuster final. Photo rolandgarros.com

rolandgarros.com June 8, 2014 by Kate Battersby Paris, France - Have you heard? Rafael Nadal is not as dominant on clay as he once was, apparently. He may not win Roland Garros again, so it is said.

Exactly which year this speculation might refer to is unclear, because it certainly does not apply to 2014. Barring the great Spaniard’s retirement from the game, there will come a time when he plays here and does not raise the Coupe des Mousquetaires skywards, but such an idea is part of some strange and fanciful future beyond imagination.

On the final day of Roland Garros 2014, Nadal faced Novak Djokovic, perhaps the only man who could have challenged him for the crown the Majorcan prizes above all others – but what transpired merely reinforced the Rafa legend. For a short while the world trembled on its axis when he surrendered the first set, but Nadal simply adjusted his focus to win in four: 3-6, 7-5, 6-2, 6-4 in three hours and 31 minutes.

His ninth title at Roland Garros is, of course, astonishing, not least because – with the greatest respect to Djokovic – the most significant story this fortnight would either be Rafa Wins Nine or Rafa Loses. The achievements of other names would be secondary, even those of a player for whom victory would mean the completion of his career Grand Slam. 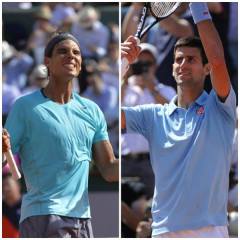 For a time at the start of the match, the unthinkable seemed possible, even though the hot conditions would favour 28-year-old Nadal. That intensity of focus which Djokovic has displayed throughout this tournament was in place once again, and when the Spaniard’s service first came under threat in the middle of the set the crowd on Philippe Chatrier Court bayed as if on championship point.

They wanted an epic, a thriller, and roared louder still when Djokovic clouted a forehand down the line for his third break point. Nadal sent the ball wide and it was 3-5. For his first set point, the Serb produced a spectacular wrong-footer which left Nadal all but face down in the dirt, and he sealed it with a supremely controlled rally. Full article