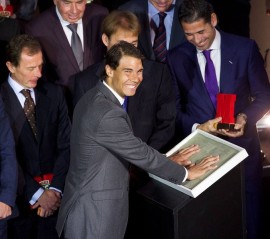 November 26 2013 ITS Staff Madrid - World No.1 Rafael Nadal was named the greatest Spanish sports star in history on Tuesday during the 75th Anniversary Gala of the Spanish sports paper Diario Marca.

The 27-year old Mallorcan, who was crowned year-end World No. 1 by the Emirates ATP Rankings, had a remarkable 2013 season after coming back from a career threatening knee injury winning ten tour-level titles, posting a match record of 75-6, including 36-3 on hard courts while reaching 14 final out of 17 tournaments.

As quoted by Marca.com, "I would like to thank everyone behind me and all those who aren't here tonight because as well as tennis, I'm mad about sport in general. I have had some unforgettable afternoons thanks to all those who have taken Spain to the highest level in sport. Thank you so much because that excitement is what makes sport feel different. As far as the results are concerned, I've had similar seasons before, but my injury made this the most exciting year of my whole career."

ATP World Tour note: Basketball star Pau Gasol, who attended the all-Spanish final between Nadal and David Ferrer at Roland Garros this year, sent a video message congratulating his countryman. “I want to send a special tribute to my friend Rafa for winning this 75th Anniversary MARCA ‘Leyenda’ award,” he said. “Congratulations, enjoy it, you’re the best.”