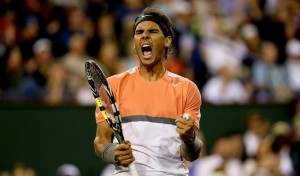 Nadal was playing in his first match since losing to Alexandr Dolgopolov in the BNP Paribas Open third round two weeks ago. On Saturday evening, the World No. 1 wore down the baseline game of his Australian opponent, winning in 69 minutes. The Spaniard's victory sets up a third-round meeting against Denis Istomin, who beat 29th seed Dmitry Tursunov 6-7(8), 6-0, 6-3 in just over two hours.

Stanislas Wawrinka bounced back from last week’s BNP Paribas Open fourth round exit to Kevin Anderson with a 6-0, 3-6, 6-3 victory over Daniel Gimeno-Traver, in the second round. It was Wawrinka's 14th win in 15 matches this year, highlighted by his first Grand Slam title at the Australian Open. Roger-Vasselin converted his third match point opportunity against No. 25 seed Marin Cilic for a 6-2, 7-6(5) victory. Cilic, like Roger Federer, has compiled 20 match wins this year.

John Isner maintained his strong run of form on home soil with a 6-7(5), 6-3, 6-4 comeback victory over countryman Donald Young at the Sony Open Tennis on Saturday. The No. 10 seeded American rallied from an early deficit to seal the second round win in just under two hours. Isner will look to advance to the Round of 16 for the second time (2011) when he battles No. 18 seed Nicolas Almagro on Monday. Almagro sent Isner’s Davis Cup compatriot Sam Querrey packing after a 6-4, 6-4 defeat in 67 minutes. 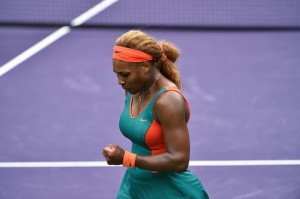 wtatennis.com: With stars like Kelly Rowland watching from the stands, Serena Williams fittingly put on a survival show at the Sony Open Tennis, winning a marathon against an inspired Caroline Garcia.

The match was neck-and-neck from the beginning - Williams won a hard-fought 38-minute first set, 6-4, and the two players were on serve through the first nine games of the second set, with a tie-break seemingly looming as Williams served at 4-5, winning the first point of that game to go up 15-0.

That's when Garcia pounced - four straight points and the 52-minute second set was hers, 6-4. The Frenchwoman extended her streak to six points in a row by building a 30-0 lead in the opening game of the third frame, but the No.1-seeded Williams got back on track right away, breaking in that game and then continuing to fight through some uncharacteristic errors to close it out, 64 46 64.

Maria Sharapova regrouped after missing two match points in the second set tie-break to beat Lucie Safarova in three sets in the third round of the Sony Open Tennis on Saturday. It looked like a lock for Sharapova as she won a routine first set, 6-4, and battled back from 1-4 to take the second set to a tie-break and get herself two match points - one at 6-5, one at 7-6.

But Safarova fought them both off and snuck out the tie-break, pushing the match into a deciding third set. But that deciding third set was all Sharapova - the No.4-seeded Russian broke early and never really looked back, eventually beating the No.26-seeded Czech after two hours and 56 minutes, 64 67(7) 62.

There's something to be said about form, but there's something even bigger to be said about head-to-head - Ana Ivanovic proved that in the third round of the Sony Open Tennis on Saturday, improving to 5-0 lifetime against Flavia Pennetta, who had just won the BNP Paribas Open. Pennetta, who won by far her biggest WTA title at Indian Wells, which was also a Premier Mandatory, came out strong - she broke in the first game and eventually led 3-1 - but the No.12-seeded Ivanovic roared back from there, winning 11 of the next 15 games to beat the No.20-seeded Italian, 64 63.

Ivanovic has now won all five of the pair's career meetings - four of the five in straight sets. Next for Ivanovic is No.8 seed Petra Kvitova, who beat Croatian qualifier Donna Vekic, 63 64. Kvitova served up 10 aces and won 74% of first serve points and an impressive 73% of second serve points.

#WinnerWinner. @JohnIsner defeats #Young 6-7, 6-3, 6-4 to move on to the third round to face #Almagro! pic.twitter.com/vkUBsXFCeg