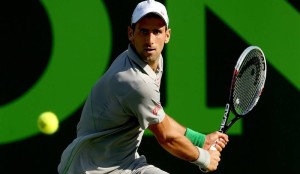 Djokovic, who is looking to win his fourth Miami crown, broke the 31-year old Spaniard once in each set while saving the lone breakpoint he faced in the one-hour and 22 minute match.

The Serbian World No.2 will face defending champion Andy Murray in the quarterfinals on Thursday. The sixth-seeded Scot had a surprisingly easy match in defeating No.11 seed Jo-Wilfried Tsonga 6-4 6-1 in 74 minutes.

Despite having recently split up with his coach Ivan Lendl, Murray seemed to have regained his confidence as the reigning Wimbledon champion broke the Frenchman’s serve four times while losing only six points off his serve and did not face a break point in dominating the match.

Asia’s No.1 Kei Nishikori battled through and saved four match points in the third-set tie-breaker to upset last year’s finalist and No. 4 seed David Ferrer 7-6(7) 2-6 7-6(9) lasting three hours and six minutes. The victory was the tenth career win against a Top Ten in the ATP World Tour. 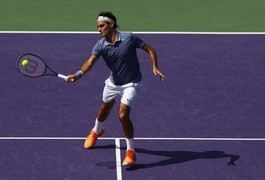 Federer was on top of his game Tuesday. Photo sonyopentennis.com

In the last eight, Nishikori will face No.5 seed and two-time Miami champion Roger Federer who out-classed No.9 seed Richard Gasquet 6-1 6-2 in 49 minutes.

Federer, who improved to 12-2 in career matches against the Frenchman, served effectively losing only seven points and saved the lone breakpoint he faced in the match while breaking Gasquet five times out of six breakpoint opportunities.

Alexandr Dolgopolov registered his second stunning upset in as many weeks knocking out reigning Australian Open champion and No.3 seed Stanislas Wawrinka 6-4, 3-6, 6-1 to book a place in the quarter-finals. The Ukrainian, who upset Nadal and reached the semi-finals at the BNP Paribas Open in Indian Wells, will now again try to make the final four against No.7 seed Tomas Berdych who won the battle of big-servers out-gunning American John Isner 6-3, 7-5 in 90 minutes.

In the women’s quarter-finals, Maria Sharapova started on a shaky first set rhythm falling behind 2-4 but recovered in time to overcome Petra Kvitova 7-5 6-1 to move one step closer to her sixth Sony Open Miami final appearance.

Sharapova, who was finalist to Serena Williams last year, will get another shot on Thursday against the top-seed who cruised past fifth-seeded German Angelique Kerber 6-2 6-2 in 62 minutes. Williams broke Kerber twice in each of the sets while serving brilliantly blasting seven aces and saved the lone breakpoint she faced. 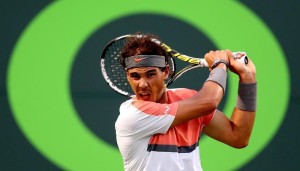 In the Tuesday’s last match, top-seed Rafael Nadal booked the last spot in the quarter-finals after crushing the always-dangerous Italian Fabio Fognini 6-2 6-2 amid some tense moments that surrounded the tennis complex.

The Miami Dade police locked down the tennis facilities after a suspicious package was found at the main entrance of Crandon Park. Traffic was halted in both directions just in front of the complex and the spectators were prohibited from entering or leaving the grounds. The lock down lasted for an hour.

Nadal, however, was not deterred as the 13-time Grand Slam champion was locked on in his own game breaking the Italian twice in each set to clinch the match in just over an hour. Nadal did not face a breakpoint while conceding only three points on his serve.

He looks unstoppable! @rogerfederer cruises to a 6-1, 6-2 win over #Gasquet to advance to a QF matchup w/ #Nishikori! pic.twitter.com/lfXAOeVSje

.@serenawilliams moves on to the semifinals for a rematch of last year's final vs #Sharapova! Beats #Kerber 6-2, 6-2. pic.twitter.com/kA0iH95YyJ

Defending champ @andy_murray d #Tsonga 6-4, 6-1 and advances to the QF as he seeks his 3rd #SonyOpenTennis title! pic.twitter.com/2QOHDqVp2W

#Upset! #Dolgopolov d @stanwawrinka 6-4, 3-6, 6-1 and moves to the QF. New contender for the #SonyOpenTennis title? pic.twitter.com/rHQGTwodPn