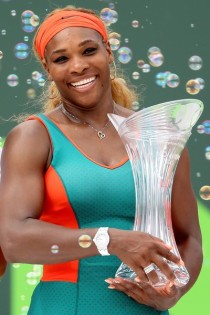 ESPN tennis analyst Mary Joe Fernandez ignited a comedic roar from the 13,897 tennis fans in attendance on Stadium Court at the Tennis Center of Crandon Park Saturday afternoon by suggesting the Key Biscayne tournament should have the women’s world No. 1 name in it. And it’s difficult to see how anyone could argue if tournament officials decided to permanently engrave “Serena” on the crystal.

With gray skies hovering over a rowdy crowd showering support for Williams from start to finish, the world No. 1 defeated a valiant No. 2 Li Na 7-5. 6-1 in the women’s championship match of the 2014 Sony Open, capturing a tournament-record seventh title, just a year after surpassing Steffi Graff as the all-time women’s titlist in Key Biscayne.

“Yeah, it was really important (to win),” said Williams, who improved to 67-7 all-time in 14 career Key Biscayne appearances and has never suffered a loss before the 4th round. Williams is now 11-1 against Li, including 5 straight wins on hard court. Full article

Queen of Miami! World No.1 @SerenaWilliams captures a 7th @SonyOpenTennis title with a 75 61 win over Li Na. #WTA pic.twitter.com/FgXqz7kTo4