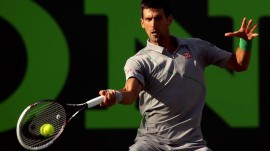 The six-time Grand Slam champion broke the reigning Wimbledon champion on the eleventh game of the first set, then capitalized on unforced errors breaking the Scot's serve on the eighth game before serving out the match in an hour and half. Djokovic will play Kei Nishikori, whom in the last match Wednesday stunned fifth-seed Roger Federer 3-6 7-5 6-4.

The 17-time Grand Slam champion was up a set and a break in the second set but could not to pull away allowing Nishikori to stay close until the tenth game of the third set. The No.20 seed raced to love-40 at 4-5 on Federer's serve but the Swiss Maestro pulled back two points to set a mini-rally. On the third match point, however, Nishkori took advantage of a short return from Federer hittng a spectacular two-handed backhand winner to clinch the match. 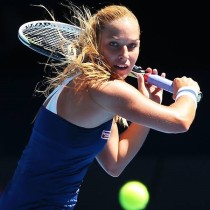 Radswanka was serving for the match leading 5-4 in the second set but the tenth-seed Cibulkova refused to concede fighting off three match points before holding her serve and subsequently winning the set in a tiebreak.

In the decider, Radswanka found herself immediately down a break after calling the trainer to alleviate the pain on her blistered right hand. Cibulkova hung on tough the rest of the way to secure the match after two hours and 40 minutes.  She will now face World No.2 Li Na whom she lost to at the Australian Open finals in January and again in Indian Wells semi-finals two weeks ago. Li Na reached the last four after defeating former World No.1 Caroline Wozniacki 7-5 7-5 Wednesday at the Sony Open.

Watch Radwanska "Shot of the Day"

WOW!!! @keinishikori upsets #Federer and advances to face #Djokovic in the Semifinals!! What a match! pic.twitter.com/LHdRsxOEXO

Down goes the defending champ! @DjokerNole moves on to the semis, defeats #Murray 7-5, 6-3! pic.twitter.com/fTX9Gi4c5W

The matchup is set!! A rematch of last year's final, @MariaSharapova will take on @serenawilliams in the semis! pic.twitter.com/J7ZgH9XQSg

Tomorrow's Order of Play is here! Which matchup are you most looking forward to? http://t.co/oPMwNH59FJ pic.twitter.com/vueHgNZkQD