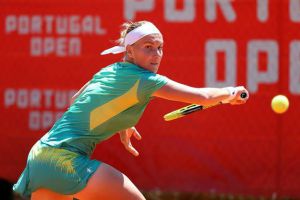 wtatennis.com May 1 2014 Oeiras, Portugal -  - Svetlana Kuznetsova just continues to find her feet on clay - the former French Open champion came alive after a slow start to beat Eugenie Bouchard at the Portugal Open, 6-4, 6-1.

It was by far the most intriguing quarterfinal showdown at the International-level stop - Bouchard one of the WTA's most promising rising stars, arguably the new generation's leader, while Kuznetsova is one of the most established veterans out there with a legendary career, including a pair of Grand Slams at the 2004 US Open and 2009 French Open and a career-high ranking of No.2, first set back in 2007.

Kuznetsova served bigger - she not only had a higher first serve percentage than Bouchard, 61% to 46%, but she also won more points on that first serve, 69% to 52%. She was also far better on her second serve, winning 67% of those points (compared to 46% for Bouchard). They each had one ace. Break points also told a clear story. Up until that turning point at 4-1 in the opening set, Bouchard was 1/1 on break points and Kuznetsova 0/4 - after that, Bouchard was 0/0 and Kuznetsova was 5/11.

Eighth-seeded Elena Vesnina rallied past fourth-seeded Roberta Vinci at the Portugal Open on Thursday to make her first WTA semifinal of the season. Vesnina was coming off an over three-hour defeat of Bojana Jovanovski that saw her survive a match point. And though her clash with Vinci wasn't quite as long, it had plenty of drama too. 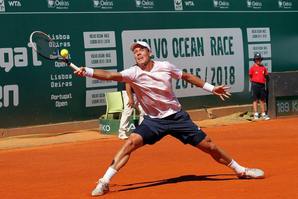 The 28-year-old Berdych is making his first appearance since 2005 at this ATP World Tour 250 clay-court tournament. The right-hander is looking to win his second title of the season, following victory on hard court in Rotterdam (d. Cilic). 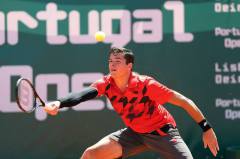 Playing at a career-high World No. 9, Milos Raonic made a confident start to his Oeiras campaign, dismissing Uruguay’s Pablo Cuevas 6-3, 6-2 in 68 minutes. The Canadian won 76 per cent of his service points and converted three of his eight break points to win his first contest with Cuevas. He is looking to reach his first ATP World Tour clay-court final this week and goes on to face Carlos Berlocq after the Argentine defeated Lukasz Kubot 6-4, 6-3.