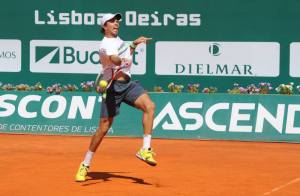 atpworldtour.com: May 4 2014 Oeiras, Portugal - Carlos Berlocq mounted a furious comeback to stun top seed Tomas Berdych 0-6, 7-5, 6-1 in the final of the Portugal Open on Sunday.

Berlocq claimed his second ATP World Tour title, having won his maiden crown at the SkiStar Swedish Open last year (d. Verdasco). He overturned a 0-19 record against Top 10 opponents entering the week, ousting World No. 9 Milos Raonic in the quarter-finals before his upset of Berdych.

The rout was on in the early stages of the final, with Berdych bursting out of the gates for 6-0 lead in just 29 minutes. It was the first bagel set in a tour-level final this year. Berlocq struggled to infiltrate Berdych’s defence, as the Czech won 75 per cent of return points in the opening set and did not face a break point on his own serve.

But Berlocq would not be deterred, snatching an immediate break to open the second set. The lead vacillated between the two competitors, before the former World No. 37 secured a late break for 6-5 and held on to pull even.

Berdych fell behind a double break in the deciding set as the momentum swung firmly in Berlocq's corner. The World No. 6 would be broken on five straight occasions to conclude the match, succumbing on Berlocq's second match point after a netted volley. The Argentine converted on seven of 10 break point chances in total, prevailing in two hours and nine minutes. He becomes the sixth winner over the age of 30 this year.