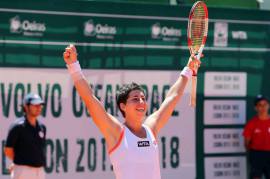 Before this week Suárez Navarro came out winless in five WTA finals - Marbella in 2009, Marbella again in 2010, Oeiras in 2012 and Acapulco and Oeiras again in 2013. And though she was the No.1 seed this week, it was never a given she was the favorite for the title, not just because she lacked a WTA title, but because the No.7 seed, Svetlana Kuznetsova, a former World No.2 with 13 WTA titles to her name - including two majors - was waiting in the final, and had beaten her three of four times.

There were a lot of turning points in the final. After grinding out a grueling 45-minute first set, 6-4, Suárez Navarro twice went up a break early in the second set, first for 1-0 then for 2-1 - but Kuznetsova came alive after getting broken that second time, winning nine of the next 11 games to not only take the second set, 6-3, but to build a seemingly insurmountable 4-1 lead in the third set.

Serving at deuce in that 4-1 game, the match turned one more time, with Kuznetsova's game totally abandoning her and Suárez Navarro's lifting up - the Spaniard won five games in a row from there, and 18 of the next 24 points, to complete a marathon two-hour-and-10-minute 6-4, 3-6, 6-4 triumph. 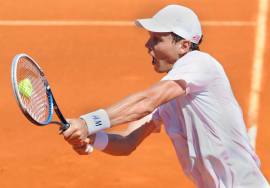 atpworldtour.com May 3 2014 Oeiras –  Top seed Tomas Berdych continued his strong run of form at the Portugal Open with a dominant 6-2, 6-2 victory over Victor Hanescu on Saturday.

Berdych advances to face Carlos Berlocq in the Oeiras final. The top Czech will vie for his third clay-court title and first since hoisting the trophy at the 2009 BMW Open by FWU AG Munich in 2009 (d. Youzhny). It will be his 22nd tour-level final overall.

The World No. 6 improved to 24-5 in 2014 with the win over Hanescu, needing just over one hour to claim victory. He fired five aces and converted on all four break points garnered. Berdych will contest his first final since ending a 16-month title drought at the ABN AMRO World Tennis Tournament earlier this year in Rotterdam. Hanescu, meanwhile, was bidding for his 200th tour-level win.

In the second semi-final, Carlos Berlocq handed Daniel Gimeno-Traver a 7-6(6), 6-2 defeat in 93 minutes. Berlocq moves into his third ATP World Tour final, having claimed his maiden title last July at the SkiStar Swedish Open (d. Verdasco). Berdych owns a 3-0 FedEx ATP Head2Head edge over Berlocq, having most recently defeated the 31 year old in straight sets in the 2012 Davis Cup semi-finals.