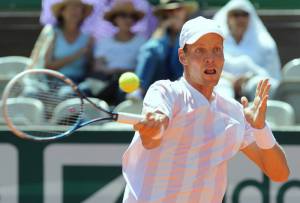 atpworldtour.com May 2 2014 Oeiras –  Top seed Tomas Berdych survived a quarter-final scare on Friday at the Portugal Open in Oeiras, but second seed Milos Raonic was not so fortunate.

Berdych fought from a set down to beat Argentine qualifier Leonardo Mayer 3-6, 6-4, 6-4 in two hours and nine minutes. The Czech was broken five times, but countered with six service breaks of his own and finished with three points more than Mayer to claim his second win over the Argentine.

The 28-year-old Berdych is looking to find his clay-court form after a third-round exit two weeks ago at the Monte-Carlo Rolex Masters. The right-hander is looking to add to the ATP World Tour title he won in Rotterdam in February (d. Cilic). He goes on to face Victor Hanescu after the Romanian ended the challenge of Portuguese wild card Gastao Elias with a 6-1, 7-5 victory. 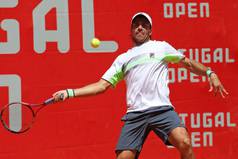 Raonic was unable to rally against Carlos Berlocq, losing 7-5, 6-4 to the Argentine. World No. 62 Berlocq won 40 per cent of points against the famed Raonic serve and broke the Canadian four times to claim victory in 86 minutes. 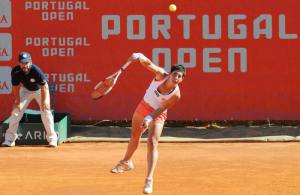 wtatennis.com May 2 2014 Oeiras, Portugal -  - Carla Suárez Navarro continued her excellent start to the season by defeating qualifier Irina-Camelia Begu to reach the final of the Portugal Open.

It is the third straight year Suárez Navarro has made it this far in Oeiras, and, after falling to Kaia Kanepi and Anastasia Pavyluchenkova on her previous two visits, she will look to make it third time lucky when she takes on Svetlana Kuznetsova in Saturday's final.

The Spaniard has looked in fine form all week, quelling any fitness fears following her retirement against Sara Errani in Stuttgart, and was too strong for Begu, running out a 7-6(3), 6-1 winner. The only slight wobble came at the end of the first set, when she was broken when serving for the set. However, she soon steadied the ship, taking the set on the tie-break before cruising towards the finish line.

This was the 25th win of the season for Suárez Navarro, who has now won more matches than any other player on tour. Having overtaken Dominika Cibulkova's total of 24 wins, the next milestone on her list is a maiden title, and she enters her meeting with Kuznetsova in a positive frame of mind.

Kuznetsova was similarly impressive in her semifinal, brushing aside Elena Vesnina, 6-3, 6-1, to reach her first final in three years and first final on clay since she won the French Open in 2009. Despite the one-sided scoreline, Kuznetsova, who knocked out No.2 seed Eugenie Bouchard in the quarterfinals, still feels there is room for improvement.