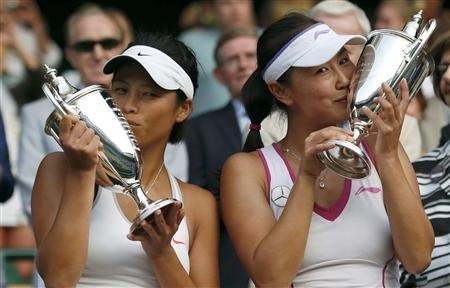 The No.12 seeded Australian pair led 5-3 and had set points but squandered the opportunity allowing Hsieh and Peng to reel off three consecutive games and win the first set tie-breaker 7-1. The 27-year olds Asian duo never looked back as they broke the Aussies two more times in the second set to secure their first major tournament crown. 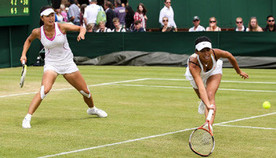 Hsieh and Peng entered the finals beating Shuko Aoyama and Chanelle Scheepers 6-4 6-3 in the semi-finals while Barty and Dellacqua defeated Anna-Lena Groenefeld and Kveta Peschke 7-6(6) 6-2 in the other semi-final.

During the interview quoted by Wimbledon.com, Peng, who is the third Chinese player to win a doubles title said “In the first set both team have chance because they have set point.  We're up like 6-5 and we have also like set point. But in the time I think I'm also little bit nervous and miseed a volley. In the tiebreak, I don't know, I think we both didn't think that much. We just try to play, try to fight.”

Hsieh added, “It's very special because I don't think tennis is popular in Taiwan.  Even if we don't see many media during this tournament. We're very proud that we can win this tournament together with my good friend.  It's first title for us, for Taiwan, so I think it's big thing in Taiwan.”

The No.8 seeds, who did not face a seeded team until the final, started playing as a team in 2008 when they won their first 11 matches and now six WTA tour titles together. Hsieh and Peng will split the winning prize of $450,000.

Barty and Dellacqua were this year's women's doubles runners-up at their home Grand Slam in Melbourne at the Australian Open. Dellacqua reached the French Open doubles finals in 2008. The Aussies were bidding to become their first Wimbledon titlists since compatriots Wendy Turnbull and Kerry Melville Reid in 1978. The pair also were the first Australians to make the final since 2009 when Rennae Stubbs and Sam Stosur were defeated in the final by the Williams sisters.