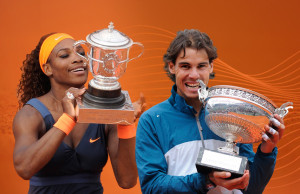 By securing the 2013 French Open, the 27-year old Mallorcan became the only male player to win a single Grand Slam tournament eight times and the first to win at least one Grand Slam tournament for nine consecutive years, breaking the record of eight previously shared by Björn Borg, Pete Sampras, and Roger Federer.

Nadal also captured his second U.S. Open title and secured the No. 1 ranking after a seven-month lay-off due to a career-threatening left knee injury. The 13-time Grand Slam champion Nadal came back in an unbelievable fashion in 2013, winning 10 tour-level titles, posting a match record of 75-6, including 36-3 on hard courts while reaching 14 final out of 17 tournaments.

Williams, the top player in women’s tennis, was honored for a year in which she won 11 tournaments, including the French Open and U.S. Open titles. San Antonio Spurs point guard Tony Parker, whose team came up just short in its quest to win the NBA title in 2012-2013, and Marion Bartoli, who retired from tennis after winning this year’s Wimbledon crown, were named the French athletes of the year.

Also the winner of this year's WTA Finals in Istanbul, Williams is regarded as one of the greatest tennis players of all time holding  the most major singles, doubles, and mixed doubles titles combined amongst active players, male or female.

She is the only player to have achieved a Career Golden Slam in both singles and doubles. Her record of 32 Grand Slam titles puts her seventh on the all-time list: 17 in singles, 13 in women's doubles, and 2 in mixed doubles.

Story of the Year: Nadal's Amazing Return to the Top