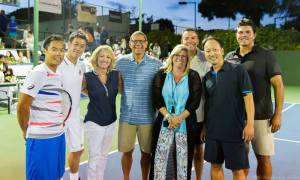 The tournament offered a variety of prizes for 3.5 – 5.5 in juniors, men’s, women’s, and open divisions in singles, doubles, and mixed competition. Each year, the Michael Chang Tennis Classic makes a heart-felt decision in choosing a charity recipient for its annual summer tennis tournament held in Newport Beach.

This year MCTC chose HomeAid, a charity organization, working tirelessly to put an end to homelessness in Orange County, California. In one of the most affluent counties in the United States, Orange County has the third highest rate of homelessness. The average homeless person is not out on the street by choice but due to unexpected circumstances because of sudden loss of employment, health and financial difficulties. There are more than 12,000 people a year who find themselves out in the streets of Orange County 2,500 of them children.

Definition of “Homeless”: A person is considered homeless when he or she lacks a fixed, regular, and adequate night-time residence and sleeps in a variety of places not fit for human habitation or meets certain other requirements. Homeless persons include, but are not limited to, those sleeping in cars, parks, campgrounds, sidewalks, railroad tracks, alleys, storm drains, freeway underpasses, abandoned buildings, etc. Watch video below...

SHOUT OUT to our super ball kids! YOU guys are amazing! #MCTC2014 pic.twitter.com/GDnqj5zdGj