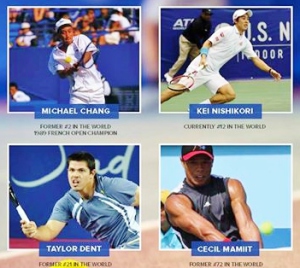 July 21 2014 Beeyong Sison Newport Beach, CA - Tennis legends got together and showed up with their vast array of skills during the Michael Chang Tennis Classic World Class Doubles Exhibition on Saturday at the Newport Beach Country & Tennis Club.

Ready to assist Chang with the charity event was current World No.11 and reigning Barcelona Open champion Kei Nishikori. The Asian No.1 was also joined by former ATP World No.72 and NCAA Singles champion Cecil Mamiit, and former World No.21 and U.S. Davis Cupper Taylor Dent. 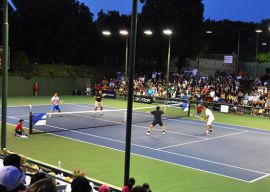 Michael Chang, now 42, was the youngest male player to win a Grand Slam singles title when he won the French Open in 1989 at the age of 17 years and 4 months. He attained the highest ranking of World No.2 in 1996 and is credited for helping Nishikori break into the ATP World Tour’s elite Top Ten at No.9 this year after winning Memphis International in February, and Barcelona Open in May.

Having served as chairman of ATP Tour Charities in 1994, Chang continues to do charity work, this time helping Orange County address a need where an estimated 456,000 people are at risk of hunger every month - most of which are working families, senior citizens, and children and persons who are recovering from the economic recession, unemployment, and health disabilities. 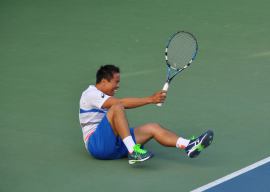 Southeast Asian Games Multi-Gold Medalist and Philippine Davis Cupper Mamiit, down but not out for a good cause. Photo Michael Chang Tennis Classic

According to the Orange County Food Bank organization, “The vast majority of hungry people who live in Orange County, hunger is a hidden problem. It strikes individuals and families with children, as well as the elderly poor.

"Many of the people who need food assistance have full- or part-time jobs. But in a county where housing costs are among the highest in the nation, a full-time job does not guarantee that a family will be able to make ends meet. Low-income people are constantly making difficult choices among food, health care and rent; food is often the first thing to go.”

The effects of hunger on our community are pervasive and far-reaching, 42% of those experiencing hunger are children, which seriously hampers their ability to learn and grow. Among the elderly and disabled, hunger can exacerbate both long- and short-term health problems and make it difficult to recover from minor setbacks. Finally, for most adults, having access to food and good nutrition is the first crucial step in learning new skills and launching a job search."

Also according to the U.S. Department of Agriculture, they estimated that more than 5 million people do not always have enough food in California.  Nationally more than 38 million people are food insecure — or 12% of the population.

The USDA reports that more than one in five children in the United States are living in a food insecure household or a household where the members are unable to consistently access the adequate amount of nutritious food necessary for a healthy life. Households with children experience food insecurity at significantly higher rates than the population.

Thanks to Michael’s initiative, hopefully more events can be organized to alleviate the suffering of the less-fortunate population by the sporting communities. The American-born son of Taiwanese immigrants, Chang was one of five athletes named in the second annual "Most Caring Athlete" list by USA Today Weekend in 1995. In 1997, he was given one of seven Asian-American leadership awards by A Magazine for his status as a role model for Asian-American youth.

Chang Returns to French Open, With a Protégé

New York Times article by Christopher Clarey - Twenty-five years later, Michael Chang still has not talked about the 1989 French Open with Ivan Lendl. Nor has he hit another underhand serve in competition. Back in Paris at age 42, Chang still has a bowl cut, still is an openly devout Christian and still is traveling with family, only this time he is here not with his parents, Betty and Joe, but with his wife, Amber, and their two daughters, ages 3 and 1. Read on