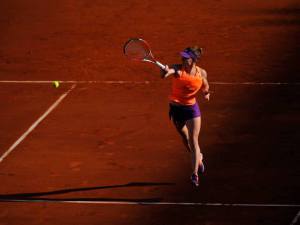 Streaking Halep has not dropped a set entering the final. Photo rolandgarros.com FFT

While her rivals for the title have tumbled, Halep has remained unflappable in Paris, cruising through to her first Grand Slam semifinal without dropping a set. The Romanian has not been downplaying her chances either, exuding an air of quiet confidence ahead of her meeting with fellow major semifinal debutante Petkovic.

A lightning start saw Halep wrap up the opening set in under half an hour, but Petkovic dug in at the start of the second, opening up a 3-1 lead before eventually succumbing, 6-2, 7-6(4). Halep is bidding to follow in the footsteps of her manager Virginia Ruzici, who lifted the Roland Garros title 34 years ago, and found it hard to conceal her excitement during the post-match interview. 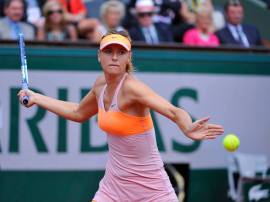 On Saturday, Halep will play for the title against Maria Sharapova who reached her third straight French Open final with a 4-6, 7-5, 6-2 win over WTA Rising Star Eugenie Bouchard on Thursday.

Sharapova's path to the last four in Paris was certainly not easy. She was six points from defeat against Samantha Stosur in the fourth round and teetered even closer to elimination against Garbiñe Muguruza a few days later. Yet, as she has on so many occasions in the past, she produced her best tennis when it mattered most, passing both tests to book a semifinal with one of the game's brightest young talents, Bouchard. 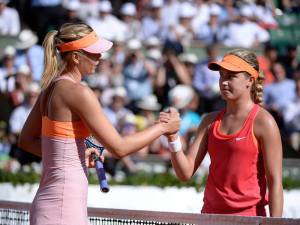 Appearing in her first French Open semifinal, Bouchard looked at home from the outset, striking the ball with a calm authority and quickly building a 3-1 lead. While Sharapova eventually wrestled back the break, there was to be no denying the young Canadian, who promptly rattled off the next two games to take the set.

The Russian began the second with a confident service hold and a trademark fist pump and was waiting to pounce when Bouchard's level dropped in the next game. This early advantage was not enough to get her over the line, though. A dramatic conclusion to the set saw the 2012 champion try - and fail - to serve it out before summoning her best tennis to finally get over the line.

Bouchard continued to battle away in the decider, playing her part in a succession of breathtaking exchanges, but it was clear the tide had turned. A missed drive volley handed Sharapova the first break and from here she turned the screw, completing her comeback when her return skidded off the baseline on her fifth match point.

Simona Halep will rise to career-high World No.3 IF she reaches @RolandGarros final--> http://t.co/JDMPmlcw3I #RG14 pic.twitter.com/vD1NxTLJrj