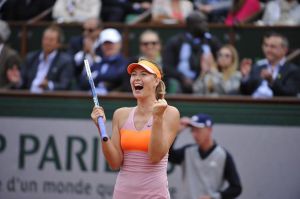 The Romanian arrived in her maiden Grand Slam final without the loss of a set, and although she wounded Sharapova with the weapons which made her invincible against all other opposition, she did not have enough in her armoury to inflict mortal damage.

It was an epic battle – the first three-set final since Jennifer Capriati came back to defeat Kim Clijsters 13 years ago. But it was Sharapova who survived the scorching sun and sapping humidity on Philippe Chatrier Court to take it 6-4, 6-7(5), 6-4 in three hours and two minutes.

The first set was a humdinger, filled with long pummelling rallies. Time and again Sharapova fired strokes that would be winners against most rivals, only for Halep to find some way to get it back. The Romanian was opening up the court with cross-court angles, and Sharapova was obliged to prove that her mastery of the clay-court game included movement good enough to cope.

She made life more difficult for herself by throwing in her old problem of double-faulting, which she began in the very first game. The subsequent break gave Halep the advantage only until Sharapova levelled for 2-2. But both women were giving it everything, and by the time Sharapova held for 3-2, already 35 minutes had elapsed. Full article > Men's Final Preview