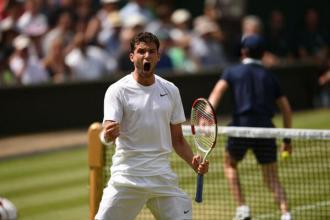 Murray, who last year became the first British player to win Wimbledon after 77 years since Fred Perry did it in 1936, came in to the match without dropping a set in four matches.

But on Wednesday, the Scot uncharacteristically committed 37 unforced errors and only hit 24 winners. Dimitrov played the steadier game breaking the Scot five times out of 9 break chances while hitting 32 winners as against 18 unforced mistakes in the two hour match.

In an interview by BBC, Dimitrov said, “As soon as we started warming up, I felt his game wasn’t at his highest level and I was confident and playing good tennis. The first set helped me get into a good rhythm and the second set tie-break was a key moment for me. Coming into the third set, I knew I had a lot of things under control. 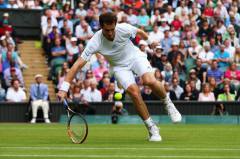 Murray was not on top of his game Wednesday. Photo wimbledon.com AELTC

“It’s never easy to play Andy especially in front of his home crowd. I was pretty fortunate today. I’m excited and happy I went through in straight sets. I was pretty steady during the whole match and came out the winner,” added Dimtirov who will now play 2011 Wimbledon winner and top seed Novak Djokovic on Friday for a place in the finals.

Murray's defeat broke a streak of winning 17 successive matches at the All England Club dating back to the 2012 London Olympics where he defeated Roger Federer for the Gold Medal.

Immediately following the Centre Court match was 7-time Wimbledon champion Roger Federer getting the better of his old pal and Davis Cup teammate Stan Wawrinka advancing with a 3-6, 7-6 (5), 6-4, 6-4 victory. With the win, the Swiss Maestro has reached a record 35th Grand Slam semi-finals.

Federer recovered from his first set loss of the tournament including dropping his first service game in 5 matches. Federer will play the Canada’s Milos Raonic who defeated Australian wildcard Nick Kyrgios 6-7(4) 6-2 6-4 7-6(4). The 19-year old Melbourne native upset Rafael Nadal in the fourth round in Friday's semifinals.

Novak Djokovic also kept pace by booking his Wimbledon semifinal slot for the fifth straight year overcoming No.26 seed Marin Cilic of Croatia 6-1, 3-6, 6-7 (4), 6-2, 6-2 in three hours and 17 minutes. The No.1 seed and 2011 champion Djokovic, has also reached at least the semifinals in 16 of his past 17 Grand Slam tournaments. (Watch post-match interviews below) 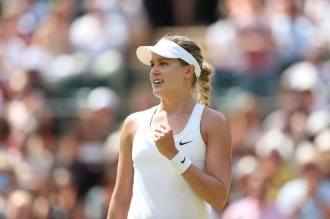 In women's action, French Open finalist Simona Halep of Romania and Canada's Eugenie Bouchard took care of their respective opponents in straight sets to advance to the semifinals.

The third-seed Halep, came back from 1-4 down in the first set reeling off 11 consecutive games to defeat last year’s finalist 2013 Sabine Lisicki of Germany 6-4, 6-0 in 57 minutes on Centre Court.

Bouchard made history on Wednesday by becoming the first Canadian to reach the singles semifinals at Wimbledon after beating Angelique Kerber of Germany 6-3 6-4 in 72 minutes.

The 20-year old also is the only woman player to have appeared in semi-finals at all three Grand Slams this year which guarantees a top-ten ranking when the WTA rankings are released next week.

Roger: "It's tough [playing Stan]. I wish him the best for the rest of the year. He's already had an absolute beauty" pic.twitter.com/qQ3XwpwMcg

Indeed it has! #WeLoveWimby RT @Wimbledon: It's been an historic day at #Wimbledon for Canada #OhCanada pic.twitter.com/7zhULx4MRP