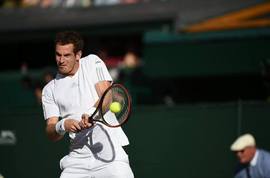 June 30, 2014 ITS Staff - Defending champion Andy Murray entered his seventh consecutive Wimbledon quarter-finals after advancing with a 6-4 6-3 7-6(6) victory over Kevin Anderson on Monday.

In-form Murray has yet to drop a set in four matches at the All England Lawn Tennis Club. Last year, the Scot became the first British player to win Wimbledon after 77 years since Fred Perry did it in 1936.

Murray hit 44 winners to Anderson’s 41 but the Dunblane-native played a more steady game committing only 12 mistakes to Anderson’s 20 in the two hours and half match.

Stan Wawrinka advanced to fourth round on Monday after the Swiss defeated Denis Istomin 6-3, 6-3, 6-4. The match was cancelled last Saturday due to heavy downpour and the reigning Australian Open champion wasted no time in securing the contest one hour and half. Wawrinka converted four out 5 break point chances against the Uzbek while saving three break chances on his own serve.

In the last 16 on Tuesday, Wawrinka will face recent Queens Finalist and 2-time Eastbourne champion Feliciano Lopez for a place in the quarter-finals. The lefty Spaniard out-slugged American John Isner 6-7(8) 7-6(6) 7-6(3) 7-5 in a match that saw 86 aces served by each player.

Despite firing 52 aces, the 6-10 No. 19 seed Isner conceded the most important service game in the deciding set allowing Lopez to break and clinch the match after almost three hours. Isner's loss marked the first time since 1911 that no American men or women are through to the fourth round at Wimbledon. 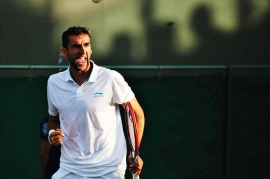 Marin Cilic barged into the quarter-finals at Wimbledon defeating Jeremy Chardy 7-6(8), 6-4, 6-4 on Monday. Coached by 2001 Wimbledon champion Goran Ivanisevic, the Croatian No.26 seed advance to the last eight for the first time since his quarter-final appearance in the 2012 U.S. Open. Cilic served 33 aces while saving four breakpoints he faced in the two-hour and 10 minute match.

After eleven tries Jo-Wilfried Tsonga still could not find a way to beat Novak Djokovic as the Frenchman succumbed in straight sets 6-3 6-4 7-6(5) on Monday allowing the Serb to reach the quarter-finals of Wimbledon. The top-seed and World No.2 Djokovic broke the No.14 seed in each of the first two sets then held off two breakpoints at 4-4 all before holding tough then taking control in the tie-breaker clinching the match in just under two hours. Djokovic will now face Cilic in the quarter-finals.

Asia’s No. 1 completed his third round match on Monday securing a berth in the Round of 16 with a 3-6, 6-3, 4-6, 7-6(6), 6-4 triumph over Italy’s Simone Bolelli. The match resumed after being halted by rain on Saturday with the score tied at 3-3 in the fifth set. The tenth seed Nishikori needed only four games to complete the match to set a showdown with fellow young gun Milos Raonic on Tuesday for a place in the quarter-finals. 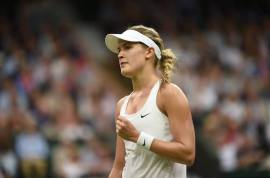 June 30, 2014 ITS Staff - Canada’s Eugenie Bouchard defeated Alize Cornet 7-6(5) 7-5 on Monday to become the first Canadian to reach the quarter-finals of Wimbledon. Cornet was unable to follow up her sensational win last Saturday over World No.1 Serena Williams.

Cornet had chances to turn the match around when the Frenchwoman led 4-2 in the second set but the 20-year old Bouchard managed to level back before taking advantage of Cornet’s unforced errors to secure the match after one hour and 46 minutes. Cornet hit 28 winners but also committed 24 mistakes.  Bouchard has now reached her third straight Grand Slam quarter-final appearance and will face either Maria Sharapova or Angelique Kerber for a place in the semi-finals 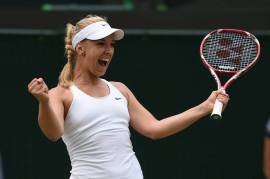 American Madison Keys withdrew from her unfinished match against Yaroslava Shvedova trailing 7-6(7) 6-6 on Monday. The match was halted on Saturday due to darkness after Keys received treatment for her injury.

Unfortunately, the Eastbourne champion of last week could not recover on time allowing Shvedova to move to the fourth round against Sabine Lisicki.

Last year’s runner-up Lisicki’s continued her successful run at Wimbledon on Monday posting a 6-4, 3-6, 6-1 victory over Serbia’s Ana Ivanovic after prolonged rain delays. Her last four appearances at the All England Lawn Tennis Club have yielded two quarter-finals, one semi-final, and a runner-up finish.

Also advancing is Ekaterina Makarova, No.22 seed, who upset fourth seed Agnieszka Radwanska 6-3 6-0 to reach her first Wimbledon quarter-finals and fourth overall in Grand Slam tournaments. At the 2013 U.S. Open the 26-year Russian also Radwanska in the fourth round reaching her third career Grand Slam quarter-final.

#Rocket Rod Laver & #Muscles Rosewall, two of the greatest of all time together @Wimbledon #Legends pic.twitter.com/xyVhiPHauU