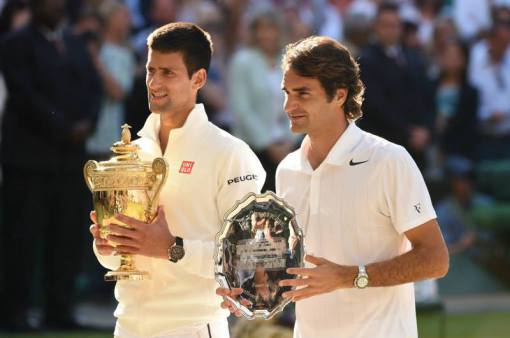 Djokovic and Federer during the trophy presentation. Photo by Florian Eisele AELTC

wimbledon.com: July 6, 2014 by Kate Kattersby - Good things come in threes, so they say. Come the autumn, Novak Djokovic will become a father for the first time; in the middle of next week, if rumour is to be believed, he will marry his long-time sweetheart Jelena Ristic, the mother of his future child; and on Sunday on the Centre Court at Wimbledon, he beat Roger Federer in a truly thrilling final 6-7(7), 6-4, 7-6(4), 5-7, 6-4 in three hours and 56 minutes, thus regaining the world No.1 spot for the first time since September last year.

It has been a long 18 months for the Serb since he collected his sixth Slam title in Australia. In three major finals since then, he has been obliged to arrange his features into the expression of the graceful runner-up, and he has met this most difficult of tests with a poise and courtesy he cannot possibly have felt in the moments it was demanded of him. Kudos to him. But on this July afternoon at Wimbledon, by his own magnificent efforts, he snapped the losing habit – and as sometimes happens at the very greatest of moments, there was no leap of joy, no howl of victory. It was only after the obligatory handshakes that his knees gave way.

To describe this final as riveting is to sell it a long way short. We knew beforehand that it would be intense. But there must be some official IBM match statistic somewhere to prove that the near-15,000 spectators on the Centre Court and goodness knows how many millions at home were entirely shorn of all fingernails at the conclusion, such was the nervous chewing of digits inspired by the extraordinary exploits on court. Read full article 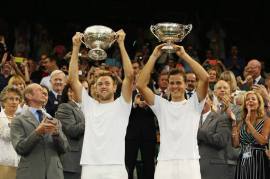 Victory for Pospisil and Sock gives them a strong chance of qualifying for the year-end Barclays ATP World Tour Finals, set to be played at The O2 in London from 9-16 November.

Pospisil and Sock are the third pairing this century to win the Wimbledon title on their tournament debut, following Stephen Huss/Wesley Moodie in 2005 and Jonathan Marray/Frederik Nielsen in 2012.

They are the third team to win a Grand Slam title in their first tournament together and first since Lleyton Hewitt and Max Mirnyi captured the US Open trophy in 2000. Pospisil and Sock had reached the final with upset wins over eighth seeds Rohan Bopanna and Aisam-Ul-Haq Qureshi, second seeds Alexander Peya and Bruno Soares and fifth seeds Leander Paes and Radek Stepanek.

After watching a match point go by at the end of the 4th, Djokovic has responded impressively & he holds to go 4-3 up pic.twitter.com/4uFo2bbs0D