Jenkins To Face Rola for NCAA Singles Crown, Gibbs One Victory Away from Repeat 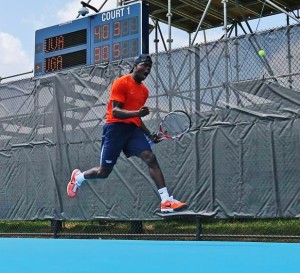 May 26 2013, ITS Staff Urbana, Illinois - Nicole Gibbs collected another victory on Sunday afternoon, moving into the finals of the NCAA Singles Championship. Gibbs easily defeated 31 Breaunna Addison of University of Texas 6-1, 6-1 and now stands just one victory away from becoming Stanford's first repeat NCAA singles champion since Amber Liu accomplished the feat in 2003-04.

Gibbs, who improved to 29-1 in May during her career, has now won 13 consecutive matches. The junior All-American closed out the 2011-12 campaign by winning 17 consecutive matches. Gibbs can also become the first player to capture the NCAA team and singles crowns in the same season since Duke's Mallory Cecil in 2009 at College Station, Texas. She will next face No.11 Mary Weatherholt of Nebraska who also had no problem getting past No.36 Alexa Guarachi of University of Alabama 6,0, 6-3.

In men’s singles semi-finals, No.3 seed Jarmere Jenkins of the University of Virginia reached the finals with a 7-6(3) 7-6 (1) victory over WAC’s Player of the Year No.11 Sebastian Fanselow of Pepperdine. Jenkins sets his sights in winning the singles crown against Ohio State’s No.12 Blaz Rola after dismissing No.19 Andreas Mies of Auburn 6-2 6-3.

Jenkins, who is still in the doubles competition, is the first men's tennis player to win the NCAA Team Championship and reach both the singles and doubles semifinals in the same season since 2001. That year Matias Boeker of Georgia became the third player of the modern era (since 1977) to win the NCAA Tennis Triple Crown (Team Championship, Singles Champion and Doubles Champion).

Jenkins and Mac Styslinger will play second-seeded Henrique Cunha and Raphael Hemmeler of Duke. The teams have already met three times this season with the Blue Devil pair winning two of the first three matches.