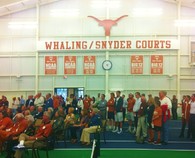 March 5, 2013, ITS Staff, Austin, Texas - The Edgar and Melanie Weller Tennis Center was officially opened last week. The ribbon-cutting ceremony marked the completion of the $8.8 million center that includes six indoor and four outdoor tennis courts located on the property of the University of Texas Golf Club in Austin, Texas.

The University of Texas initiated the construction of the tennis center five years ago and was named after the Wellers, who established the Edgar O. and Melanie A. Weller Charitable Remainder Trust, that provided most of the amount in financing the project. The facility presents the Whaling-Snyder Tennis Courts named after former player Graham Whaling and Texas Hall-of-Fame coach Dave Snyder.﻿ 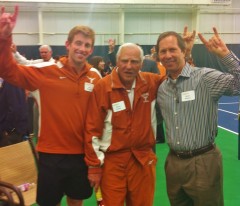 In a phone conversation with former UT All-American Gary Plock, ITS Director, confirmed that his teammate Whaling contributed $2 million to secure the realization of the much-needed facility. Whaling played under the legendary coach Snyder from 1972 until 1976 and now owns an investment banking advisory firm based in Houston, Texas.

In his senior year in 1976, Whaling served as team captain under Coach Snyder which saw their Longhorns team emerge as one of the most successful teams in US College tennis. The period produced multiple All-Americans led by Plock (’74-’78), 1978 NCAA Singles champion Kevin Curren (Wimbledon Finalist in 1985)and Steve Denton (1981-82 Australian Open Finalist).﻿ 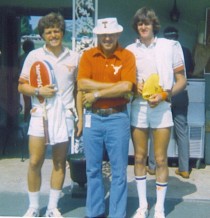 Curren and Denton won the US Open Doubles in 1982. Curren and Plock reached the NCAA Doubles runners-up including a win over John McEnroe and Bill Maze of Stanford en-route to the finals.  Denton currently serves as Head Coach of Texas A&M.

In an interview by UT Athletics Media Travis Feldhaus who was following the developments, Whaling said, "I developed a close relationship with Coach Snyder. I continue to feel an allegiance to the program and appreciation for what Coach Snyder did for the program and what Coach (Michael) Center continues to do for the program today. I was approached by other former players and Coach Center regarding the need for an indoor tennis facility. A portion of the required funds had been raised, but UT needed additional funding. I began speaking with Coach Center regarding this facility about a year ago. I'm happy to be able to make a contribution."﻿ 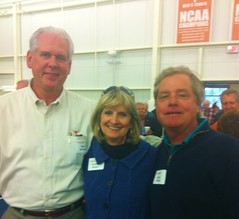 UT Coach Michael Center, who took the helm in 2000 and helped in the fund-raising efforts upon his arrival at Texas said, “Although our weather here in Austin is pleasant enough to get a good amount of outdoor practice time throughout the fall and spring, they are occasionally halted due to inclement weather."

Center added, "Graham Whaling has made a contribution that will impact Texas tennis and the entire Austin tennis community for years to come. I can't say how appreciative we are to have someone like Graham to be involved in this project. I am very thankful to Graham and happy that he found our indoor tennis project something that he was so passionate about to offer his support.”﻿

All-American NCAA singles champion in 1990, Steve Bryan said, "The idea of being part of a world-class facility proudly bearing the UT name, and being here at the beginning, is an opportunity anyone in the tennis world would embrace. And we'll make this a facility that Longhorn fans everywhere will be proud of when they see Texas Tennis compete and win on our courts." Bryan will serve as the facility's Director of Tennis.﻿ 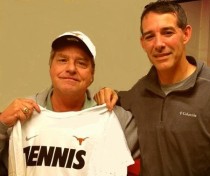 UT head women's tennis coach Patty Fendick-McCain, who was also in attendance said, "Our tennis programs are greatly indebted to Graham Whaling. An indoor tennis facility would help our programs immensely, and Mr. Whaling's contribution goes a long way toward making this a reality.” Coach Fendick-McCain won two NCAA Singles Titles in 1986 and 1987 for Stanford University and is married to former ATP Tour star Scott McCain of Cal-Berkeley.