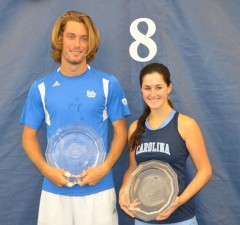 Loeb faced Robin Anderson of UCLA in a repeat of their Riviera/ITA Women's All-American Championships matchup, which Loeb won 6-4, 6-0. Thompson, like Loeb, has also been on fire this fall season, and he extended his winning streak to 15 matches after defeating Jared Hiltzik of Illinois, 6-4, 7-5. The Bruin did not drop a set in winning his first college major. 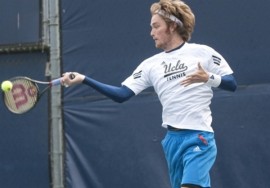 Thompson has been on fire since the season started. Photo itatennis.com

The 6'6" Thompson got the key break at 4-all in the first set and served out the set for a 6-4 lead.  His booming forehand, serve and net play have been in fine form all tournament, and his aggressive play continued to shine in the final. He broke Hiltzik to take a 2-0 lead and he hung on to the break until it was time to serve for the match at 5-4.

Thompson admitted he got tight while serving for the match, and two double faults helped Hiltzik get the break to level the set at 5-all. Thompson did not relent and he broke straight back, and held his serve a final time to clinch the victory.

He said after the match that he'd also felt tight at the beginning of the match. "I've never won a major tournament at any level. I got to the finals at Easter Bowl and that was the closest I've ever gotten," he said. "But I was having a blast out there. It's such a cool tournament. To be in New York at Flushing Meadows where all the greats have played, it was an amazing experience."

Thompson ended the 2012-2013 season ranked No. 107 in the ITA Men's Singles rankings and started this season No. 74 in the ITA Preseason Rankings.