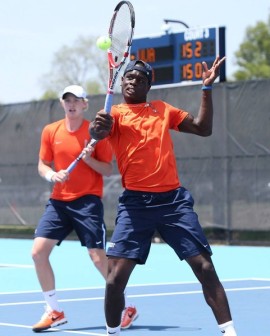 virginiasports.com: May 21 2013, Urbana, Illinois - The Virginia men's tennis team won the first NCAA Championship in program history as it defeated UCLA 4-3 in the 2013 NCAA Tournament final Tuesday at the Khan Outdoor Tennis Complex.

The second-seeded Cavaliers (30-0) capped an undefeated season with the victory over the top-seeded Bruins (29-2) and became the first ACC school to win a men's tennis NCAA title.

Mitchell Frank (Annandale, Va.) clinched the championship with a come-from-behind 0-6, 6-4, 7-5 victory at No. 3 singles over Adrien Puget in the decisive match. Frank, who was down a break in the third set, saved a team match point before rallying for victory.

The Cavaliers took a 1-0 lead by winning the doubles point, which proved crucial. At No. 1, Jarmere Jenkins (College Park, Ga.) and Mac Styslinger(Birmingham, Ala.) rolled to an 8-2 win over Marcus Giron and Dennis Novikov to give the Cavaliers the edge. Julen Uriguen (Guatemala City, Guatemala) and Justin Shane (Falls Church, Va.) rallied from down an early break to top Alex Brigham and Clay Thompson 8-5 at No. 3 doubles to clinch the point.

In singles, each team won three first sets as the match remained close throughout. The Cavaliers extended their lead to 2-0 as Shane cruised to a 6-2, 6-2 win at No. 5 over Thompson, snapping the Bruin's 14-match win streak. UCLA answered with a pair of victories to draw even in the match, 2-2. Giron got the Bruins on the board with a 6-4, 6-4 victory overAlex Domijan (Wesley Chapel, Fla.) at No. 2, and Dennis Mkrtchian followed with a 6-4, 6-3 victory at No. 4 over Styslinger.

Virginia retook the lead, 3-2, as Jenkins he completed a 7-6(3), 6-3 victory at No. 1 over Novikov. Jenkins, who was named the ITA National Senior Player of the Year earlier in the day, was named the NCAA Tournament Most Outstanding Player.

The final two matches on the courts went to a third set with the Cavaliers needing to win one to claim the national title. At No. 6, Karue Sell rallied for a three-set victory over Uriguen, 4-6, 6-3, 6-2 to bring UCLA even, 3-3, and set up the dramatic ending on court No. 3.

After losing the first set to Puget 6-0, Frank responded by winning the second set 6-4 to force a decisive final set. Frank went up a break 2-1 only to see Puget break back in the ensuing game. Puget broke Frank again to take a 5-3 lead and served for the match for the Bruins. On championship point, 40-30, Puget approached the net to put away a shot that would clinch the title for UCLA, but his foot stepped on the net and the point was awarded to Frank to bring the game to deuce. Frank won the two points that followed to get back on serve, 4-5.

After Frank held his serve to draw even at 5-all, he broke Puget's serve again to allow him to serve for the match at 6-5. He won the first three points to take a 40-0 lead, but Puget saved the first two championship points for Virginia. On the third championship point, Puget sailed a shot wide that sparked the Cavaliers' celebration of their first NCAA Championship.

In addition to NCAA Tournament MVP Jenkins, Frank (No. 3 singles), Jenkins/Styslinger (No. 1 doubles) and Shane/Uriguen (No. 3 doubles) were named to the NCAA All-Tournament team. Virginia becomes the 14th school in the 67-year history of the NCAA Men's Tennis Championship to win the title. It is the 20th NCAA Championship in Virginia athletics history.

Video below, UCLA's Adrien Puget is serving for the National Championship up 5-3 in the 3rd against Virginia's Mitchell Frank at #3 singles. The controversial (but correct) call that kept Virginia alive comes at the 4:23 mark. Puget had a chance to put the 1st ball away but Frank made a lunging get to keep the point going then as Puget closed in to hit his volley his foot slides into the net and the chair makes the call as Frank's returns sails long.

Mitchell Serves for the Team Championships