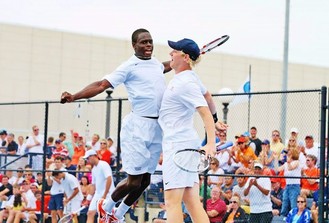 virginiasports.com: May 20, 2013: Urbana, Illinois – Virginia advanced to the NCAA tournament final for the third consecutive year, downing Georgia 4-1 in a semifinal match Monday at the Khan Outdoor Tennis Complex. The second-seeded Cavaliers (29-0) will meet top-seeded UCLA (29-1) in Tuesday’s championship match.

The Cavaliers took a 1-0 lead by winning the doubles point for the 27th time in 29 matches this season. Alex Domijan and Mitchell Frank got Virginia on the board with an 8-3 victory at No. 2 against Nathan Pasha and Garrett Brasseaux. At No. 3, Justin Shane and Julen Uriguen rallied from an early 3-0 deficit to win eight of the next nine games, defeating Eric Diaz and Marco Nunez 8-4 to clinch the point. In singles, the Cavaliers took four of the six first sets, but it was Georgia who captured the first match off the courts. At No. 1, Ben Wagland topped Jarmere Jenkins 7-5, 6-3 to even the score at one. Virginia retook the lead as Frank completed a 6-3, 6-3 victory against Austin Smith at No. 3 singles. The advantage stretched to 3-1 as Uriguen defeated Nunez 6-3, 7-5 at No. 6 singles.

The final three matches came down to a decisive third set. At No. 2, Domijan rallied from losing the first set to force a third set against Pasha. Domijan went up an early break in the final set only to see Pasha break back to even the set at four. In the ensuing game, Domijan took advantage of three Pasha double faults to break back and allow him to serve for the match. He held his serve at love to clinch the 3-6, 6-3, 6-4 victory and send the Cavaliers into the final.

For the third consecutive year, the Cavaliers will meet a team from Los Angeles in the final. Virginia will look to win its first NCAA championship when it meets UCLA, after falling to USC in the 2011 and 2012 finals. The Cavaliers and Bruins haven’t met since a 4-2 Virginia victory in the 2010 NCAA quarterfinals in Athens, Ga.

uclabruins.com: Urbana, Illinois - UCLA men's tennis has earned a spot in the NCAA Final for the first time since 2005, as the top-ranked Bruins edged No. 5 Ohio State, 4-3 on Monday in a classic semifinal showdown between the two tennis powerhouses at the University of Illinois' Khan Outdoor Tennis Complex.

With the score tied at 3-3, the outcome of Monday's match rested on the shoulders of Bruin sophomore Marcos Giron, who was in a tight battle with Ohio State's eighth-ranked Peter Kobelt at the No. 2 position. Giron, who is ranked 25th nationally in singles, lost the first set and barely managed to scrape out the second set, winning in a tiebreaker. The third set remained on serve for the first nine games, however with Kobelt serving to stay in the match at 4-5, Giron made his move. Giron fought off two game points and earned his first match point when Kobelt dropped a backhand into the net. Fortunately for the Bruins, Giron wouldn't have to hit another ball, as Kobelt double-faulted on the crucial match point, paving the way for Giron's teammates to storm the court in celebration.

Said UCLA head coach Billy Martin, "It seems like this is the way it is every time we play Ohio State. It was so close. Ty Tucker (Ohio State coach) always has his guys ready to play hard. They're a really physical team. They played bad doubles. The wind really threw them off. They regrouped, came out and put that behind them. They were right there to win the match. A couple shots here and there and it could be us out."