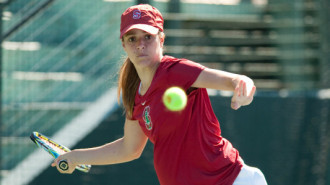 Texas A&M got the clinching victory from Ines Deheza after she defeated Chanelle Van Nguyen at four singles in a marathon three-set match 6-3, 6-7(9), 6-4. Texas A&M moves on to the NCAA team final against No. 12 Stanford. The match is slated for Tuesday at 6 p.m. ET. Texas A&M is searching for its first championship in program history, while Stanford is going for its 17th team crown.

The second set came down to a marathon tiebreaker in which Deheza fought off several set points and had match point at 7-6 before eventually falling, 11-9. Deheza broke and then went up 2-0 to open the third set before Van Nguyen got on a roll and won four consecutive games to go up 4-2. Van Nguyen was up 40-love in the next game when Deheza rallied and won the game to get within 4-3. Deheza held serve to tie the set at 4-4, and continued a run of 10 straight points into the next game. Deheza was at game point when Van Nguyen began to cramp and was unable to serve in the allotted time frame and therefore was issued a point penalty, giving the game and a 5-4 lead to Deheza.

Deheza was up triple match point in the next game, and despite Van Nguyen hobbling in severe pain, the Bruin scored two points before Deheza clinched the historic win.  The Bruins began the match by winning the doubles point to take a 1-0 lead. The 25th-ranked duo of Robin Anderson and Skyler Morton defeated A&M’s 18th-ranked Stefania Hristov and Cristina Stancu, 8-5 at the No. 1 line. Catherine Harrison and Kyle McPhillips followed with a 9-7 victory over twins Ines and Paula Deheza at No. 3 to clinch the point for the Bruins, snapping the Deheza’s nine-match winning streak. It also marked the first time A&M had lost a doubles match in this year’s NCAA tournament. Fourth-ranked Cristina Sanchez-Quintanar began singles by pulling off the highest ranked win in her career and knotting the team score at 1-1 with a 6-1, 6-3 victory over third-ranked Anderson at the No. 1 line. UCLA went up 2-1, as Harrison defeated Anna Mamalat, 6-4, 6-2 at the No. 5 line, and the Bruins widened the margin to 3-1 as McPhillips came back to defeat Stancu, 2-6, 6-0, 6-1 at the No. 2 court.

gostanford.com: May 20, 2013, Urbana, Illinois - No. 12-seed Stanford continued its run of upsets by knocking off top-seeded and two-time defending national champion Florida 4-3 in the NCAA semifinal on Monday evening at the Khan Outdoor Tennis Complex. The Cardinal will advance to face third-seeded Texas A&M in the NCAA championship match on Tuesday at 6 p.m. ET.

Stanford got the crucial doubles point with 8-3 wins on both courts one and two. At No. 1 doubles, the eighth-ranked duo of Kristie Ahn and Nicole Gibbs topped 11th-ranked Lauren Embree and Sofie Oyen from Florida. On court two, No. 28 Stacey Tan and Ellen Tsay easily won to give Stanford an early 1-0 lead. Nicole Gibbs knocked off the top-ranked player in the country with ease, beating Embree 6-0, 6-1 at No. 1 singles. Gibbs has now knocked off both the No. 1 and No. 2-ranked players in the country in the tournament in straight sets, having beaten USC’s No. 2-ranked Sabrina Santamaria on Friday.