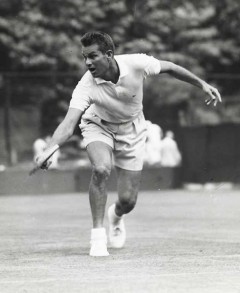 daviscup.com November 22 2013 - It seems only fitting that the ITF’s Centenary celebrations should be coming to an end the same year that one of the finest stalwarts of the game reaches the very same landmark figure. Gardnar Mulloy, who helped USA to win Davis Cup on three occasions (1946, 1948 and 1949) and who represented his country in 12 Davis Cup ties, turns 100 today.

Mulloy also won the US Championship doubles with Bill Talbert in 1942, 1945, 1946 and 1948, together with holding the record as the oldest player to have won the men’s doubles at Wimbledon, after successfully teaming up with Budge Patty in 1957, at the age of 43. Mulloy is also widely regarded as one of the founding fathers of Seniors tennis as he was one of the first former top players to play Seniors tennis regularly. He was instrumental in persuading others to do the same, such as his good friend Bobby Riggs, with whom he played on several World Team Championship-winning teams.

He will forever be remembered on the Seniors circuit because of the Gardnar Mulloy Cup, a trophy which he donated in 1996 and which later became the world team championship for men aged 80 and over. The inaugural Gardnar Mulloy Cup was held in Seefeld, Austria. Under the captaincy of Gardnar Mulloy himself, USA won all its matches in the round-robin format to secure the title.

Mulloy's greatest contribution to tennis was advancing the popularity of Senior Tennis. He played the senior circuit around the world into his 90s, and contributed the Mulloy Cup for international competition between men tennis players 80 years of age and over. He has won over 127 National Championships and 25 International Titles over his 75 years of playing competitive tennis. 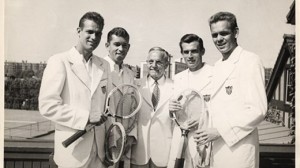 “Seniors tennis offers rich rewards,” said Mulloy. “Be it through your racket, supporting programs or administration. It will improve your life, as it has for me and many others – so go for it, you’re never too old, you can’t miss.”

ITF President Francesco Ricci Bitti said: “Gardnar Mulloy is one of the iconic figures of ITF Seniors tennis. A three-time Davis Cup champion, he played a important role in the early development of veterans tennis, and has been a loyal and enthusiastic supporter ever since. In 1996 we were pleased to name our new men’s 80-and-over team competition after him, and it is fitting that he celebrates his 100th birthday in the ITF’s own centenary year.”