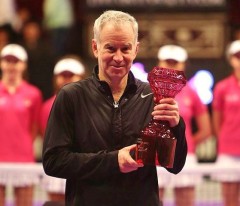 McEnroe was hitting the ball clean throughout the match. Photo atpchampionstour.com

atpchampionstour.com December 8, 2013 London -  John McEnroe captured the Statoil Masters Tennis Legends title for the third year in a row on Sunday as he defeated Mats Wilander 6-2, 6-4 at the Royal Albert Hall in London.

"I'm figuring I have maybe one or two more years against Mats; he's getting closer,” said McEnroe, who also defeated Wilander in last year’s final. “So next year it'll probably go to a third set; that may be the time to hang it up. So that means I can come back one more time!”

Wilander said, "It's great to get three matches in here plus doubles with Mansour [Bahrami] and John [McEnroe] the other day. I think it's John that said it's our Wimbledon these days. John is hitting the ball extremely well. He returns so well. I think that's something that has maybe got better with age. It's really hard to find a space in the service box that he doesn't get to. He seems to read my serve and he's just a little too good, especially on the big points.” Complete results & schedule 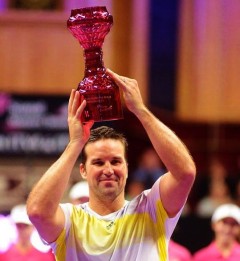 "That's the best tennis that I've played since I've been doing these events," said Rafter. "I feel like I found something in my game, which is weird at 40 years of age. I feel like I'm actually still working on things. The 40-year-old Rafter, a two-time US Open champion, powered through to the title without the loss of a set this week, beating Greg Rusdeski and Goran Ivanisevic in the group stages.

From 4-3 in the first set, Rafter reeled off five straight games to clinch the opener and set up a commanding second-set lead. He served Ivanisevic off the court on Saturday and produced more of the same against Henman. The Australian kept Henman under pressure and drew errors in the sixth game to break for a 5-1 lead. Camped out at the net, Rafter served out the victory to 30. 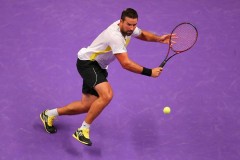 atpchampionstour.com December 7 2013 London - Pat Rafter set a Statoil Masters Tennis final with Tim Henman after defeating Goran Ivanisevic 7-6(5), 6-4 to win Group B. In a rematch of the 2001 Wimbledon final, Rafter produced what he claimed was his best ever serving display. With Henri Leconte chiming in from the courtside boxes during a sponsor suite visit, Rafter found a winning forehand return to gain the edge in the first-set tie-break and clinched the opener with an ace.

Rafter raced into a 4-0 lead in the second set, with Ivanisevic calling on advice from spectators to combat the Aussie’s purple patch. The Croatian clawed his way back to 5-4, but Rafter closed out victory.

“It’s weird, I don’t think I was playing that well on the tour 12 years ago,” said Rafter. “I would have won a few more matches if I'd played like that! I was really happy with how it went. I can’t ever remember serving that well. I wish I knew what the secret was to that when I was playing! I moved well, returned well. I can’t play any better than that.”

Ivanisevic said, “He served unbelievable. I’ve played him so many times on tour and he never served like that. He was just too good. It was really enjoyable to play and lose against a guy like that.”  Complete results & schedule 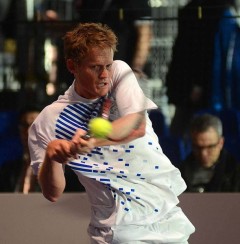 atpchampionstour.com December 7 2013 London - A win for Wayne Ferreira over Sergi Bruguera guaranteed John McEnroe will contest the Legends final at the Statoil Masters Tennis against Mats Wilander on Sunday. Ferreira, who lost to McEnroe in straight sets on Thursday, defeated Bruguera 6-4, 6-4, meaning McEnroe tops Group A on sets won.

"When I last saw Wayne last night I wasn’t liking the look of his chances so I’m pleased he’s pulled that one out of the bag today," said McEnroe. "I definitely owe Wayne dinner tonight that’s for sure."

Looking ahead to the final against seven-time Grand Slam champion Wilander, McEnroe commented, “He’s probably seen everything I’ve got. I don’t think we have any secrets from one another so that should make for a good match.”

Thomas Enqvist made the most of his opportunity to fill in and play at the Statoil Masters Tennis on Saturday afternoon. The Swede was victorious over Fabrice Santoro, leading 7-6(6), 2-3 when the Frenchman was forced to retire.

Santoro would have contested Sunday’s final, but, due to his injury, was forced to retire from the tournament and Tim Henman will take his place, having come second in the group. Complete results & schedule 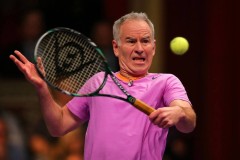 Mac still has a chance to reach final. Photo atpchampionstour.com

"It was fun to play Tim once again here in the [Royal] Albert Hall,” said Santoro. “He's a crowd favourite and I think we played a good match. It's always a pleasure to see your old competitors in a different atmosphere. Even though we're 40 years old, we're still keeping well and able to play some good tennis and hit some good

“I fought my heart out,” said McEnroe. “I gave everything I had, but he played well. I thought when he got injured that I had it. I tried to hit some more drop shots to really make it hurt, but it didn't quite work out. I really wanted to kick his you-know-what, but he's a great player and I just couldn't quite get over the line.” 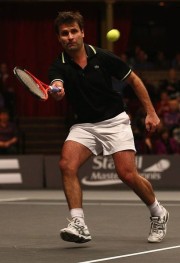 Bruguera said, “It was fun, close, very nice points, and we both played a great match. It was very serious, we were both concentrating to win, and we tried to play our best. I hurt my hamstring. The movement is very different here to where I have been practising on clay, you have to be very low all the time.”

Bruguera, a two-time former winner at Roland Garros, will advance to the final if he beats Wayne Ferreira on Saturday. Should Ferreira win, McEnroe will contest the final against Mats Wilander who advanced when Jeremy Bates was forced to retire due to an injury. The victory for Wilander is his second of the week. 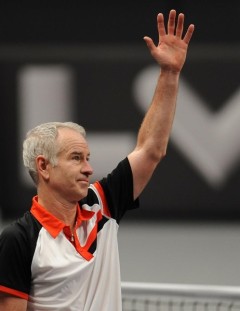 atpchampionstour.com: December 6 2013 London - It wasn’t without its drama – would it be a John McEnroe match otherwise? – but the American opened his Statoil Masters Tennis campaign with a 7-6(9), 6-2 victory over former World No. 6 Wayne Ferreira on Thursday evening.

McEnroe kissed the net after a lucky net cord gave him a 4-2 lead, but Ferreira came back to force a tie-break, hitting arguably the shot of the match in the process when he returned a McEnroe smash with a smash winner of his own from the baseline.

“Oh, that felt good!” exclaimed the South African. McEnroe squandered a 5-1 lead in a pulsating tie-break, but eventually prevailed 11-9. Buoyed by the lead, the American, a seven-time Grand Slam champion, put his foot down in the second set and claimed victory with two breaks in 87 minutes. 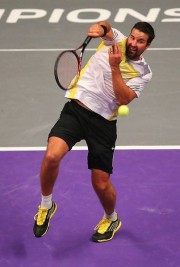 Pat Rafter meant business in a 6-3, 6-2 victory over Greg Rusedski at the Royal Albert Hall in London. The meeting came 16 years after they contested the 1997 US Open final, which Rafter won in four sets.

"I like to start off hard and if the other guy's playing well, which he was in the beginning, then it becomes a tight match,” said the Australian Davis Cup captain. “He could have broken my serve early on and that would have changed the complexion of the match.

Rafter will now face Goran Ivanisevic in a repeat of the 2001 Wimbledon final on Saturday night, with the winner to go through to Sunday’s final. In the Legends tournament, former World No. 1 Mats Wilander defeated Henri Leconte 6-3, 6-4. Full article 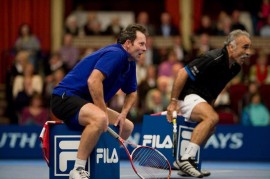 In an evening singles match Mark Philippoussis was forced to retire due to a back injury against Tim Henman. The 2002 Wimbledon finalist injured his back in his service motion with score 4-5 in the opening set. In the Legends Tournament, former World No. 5 Henri Leconte defeated Jeremy Bates 7-6(2), 7-5 in Group B. 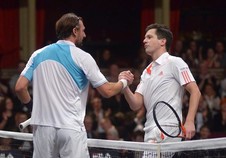 Elsewhere on Wednesday afternoon, Jeremy Bates takes on Henri Leconte, with Thomas Enqvist and Wayne Ferreira up against Jamie Murray and Fabrice Santoro in the doubles. In the evening, Pat Rafter, Tim Henman, Greg Rusedski, Mark Philippoussis and the ever-popular Mansour Bahrami will star in a Grand Opening Night to benefit the tournament’s 2013 charity, Best Beginnings.

Goran will again play on Thursday night for the doubles match when he partners Sergi Bruguera against Philippoussis and Fabrice Santoro in the afternoon session. On Saturday night, Ivanisevic will reprise his 2001 Wimbledon final match-up when he takes on Pat Rafter, but before then, he has his trip to the home of West Brom to look forward to. Official website > Champions Tour