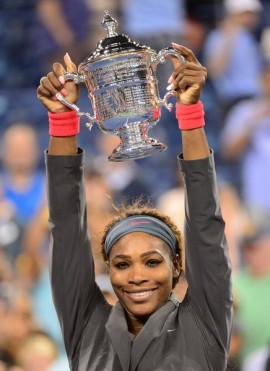 usopen.org: September 8, 2013 by Erin Bruehl - Serena Williams is already regarded as one of the greatest women’s players in history, with arguably the greatest serve of all-time to go with a tremendous fight, determination and power ground strokes that few other women can match.

And on a night where her serve was not at its best, it was her fight and determination that powered her through errors, wind and Victoria Azarenka, 7-5, 6-7, 6-1, in two hours and 45 minutes for her fifth career US Open title and 17th major championship. It is her second Grand Slam title of the year, to go with her French Open crown, and even though she had 16 Slams under her belt coming to New York, this title means just as much as all the others – and makes her season all the better.

It was the longest US Open women’s final since 1980, and with the win, Serena earned the largest paycheck in women’s tennis history at $3.6 million – $2.6 million for her US Open win and an additional $1 million in bonus prize money for winning the Emirates Airline US Open Series Bonus Challenge this summer. She also improved her record in Grand Slam finals to an impressive 17-4, her record against Azarenka to 12-3 and put her one Grand Slam title shy of tying Chris Evert and Martina Navratilova’s haul of 18 majors.

With each win, Serena Williams continues to etch her place in history. Her 17 major titles put her just one behind Chris Evert and Martina Navratilova on the all-time list. Her 2013 US Open win also is her 55th career title, tying her for seventh most in the Open era with Lindsay Davenport and Virginia Wade. At 31 years, 348 days, Serena is the oldest US Open champion since Margaret duPont in 1950 and her fifth US Open title ties her with Steffi Graf for the second-most US Open titles in history behind Evert's six. Full story 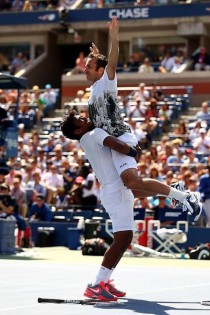 atpworldtour.com: September 8, 2013 - Fourth seeds Leander Paes and Radek Stepanek have clinched their second Grand Slam title as a team, winning the US Open men's doubles final 6-1, 6-3 over second seeds Alexander Peya and Bruno Soares in one hour and 12 minutes. It's the Indian/Czech team's fifth title together, and second major following victory at the 2012 Australian Open. Paes dedicated Sunday's win to Richard Leach, the father of his coach Rick, and a former tennis coach at the University of Southern California. It is the eighth men's doubles Grand Slam title for the 40-year-old Paes who won in New York in 2006 and 2009 with Martin Damm and Lukas Dlouhy respectively, both also from the Czech Republic.

"This one really means a lot to me, because through this year we both had to handle a lot of adversity," said Paes. "I never lost the belief that I could come back and [Leander] was always in my corner, waiting for me," said Stepanek, who underwent spinal surgery earlier this year. It's third-time lucky for the 34-year-old Stepanek, who finished as runner-up in 2002 and 2012, partnering Jiri Novak and Paes respectively. Full article