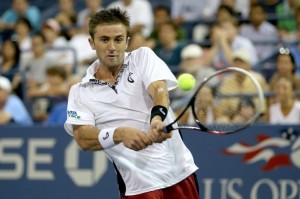 September 02 2013: Beeyong Sison - When Marcel Granollers rallied from 1-4 down in the fifth set to defeat the last male American standing in the tournament Tim Smyczek 6-4 4-6 0-6 6-3 7-5 on Sunday, it marked for the first time that no American male player reached the fourth round at the U.S. Open.

The two top-ranked American No. 17 John Isner and No.31 Sam Querrey failed to advance past the third round. Young hopefuls Ryan Harrison and Jack Sock, a 20-year-old Nebraskan, fell to Rafael Nadal in the opener and veteran Janko Tipsarevic in the third round respectively.

Smyczek’s (pronounced Smee-check) loss also marks this season that no American men advanced to the last eight at any of the four Grand Slam tournaments since the Open Era began in 1968.

It was tough for someone like the 5-foot-9 Smyczek, who is ranked a lowly No.109 and who entered via wild-card, to lift American tennis from the doldrums.  In this year’s Wimbledon in July, there was no American male player that advanced past the second round of Wimbledon for the first time in 101 years.

It’s a shocking southward trend for a country that saw tennis greats Jimmy Connors and John McEnroe dominate in the mid-late 70s and early 80s, and then by Pete Sampras, Andre Agassi, Jim Courier and Andy Roddick in the 90s and early 2000s.

When the ATP World Tour released the final rankings last year on November 19 2012, it marked the first year that an American male tennis player failed to make the top ten season-ending list since 1973. For a week last month, the top-20 did not have any U.S. players for the first time since computerized rankings began in 1973.

Smyczek, however is optimistic, when he was quoted by USA Today’s Douglas Robson, "I really think we're in a good place. I think that you can expect some guys that are ranked around 80, 90, 100, to really make a jump later this year and in the early part of next year. I think John and Sam are really going to come back in a big way."

After the match Smyczek , who was dubbed “the last American man alive” status, added, "I never heard somebody yell out from the stands, 'You're our last hope,' that was new."

The 25-year old Smyczek’s best career showing was reaching the quarterfinals of the 2011 SAP Open – San Jose with a win over Kei Nishikori before losing to Gaël Monfils.  Earlier this year in the 2013 Australian Open, Smyczek got into the main draw as a lucky loser beating Ivo Karlović in the first round then lost to world no. 4 David Ferrer in the second round in four sets. Tim reached the doubles final of the 2013 Hall of Fame Tennis Championships with partner Rhyne Williams where they lost to the French pair Nicolas Mahut and Edouard Roger-Vasselin.

A Milwaukie native, Smyczek plays the violin and wants to be a lawyer when he is through with his professional tennis career.