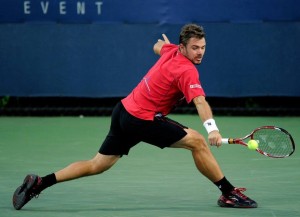 September 05 2013 ITS Staff: New York - No. 9 seed Stanislas Wawrinka pulled off a stunning upset of dfending US Open champion Andy Murray on Thursday at the Arthur Ashe Stadium with a straight sets victory 6-4, 6-3, 6-2.

The reigning Wimbledon champion, went down in defeat unable to find rhythm in a match the Swiss totally dominated from start to finish. The No.2 Swiss,who had upset Murray here at the U,S.Open in 2010 US Open in the third round in four sets, ripped 45 winners while dictating his service games at will without facing a single breakpoint in a match that lasted two hours and 15 minutes.

The Scot meanwhile committed 37 unforced errors despite hitting 30 winners. Wawrinka will now meet the winner between Novak Djokovic and Mikhail Youzhny who will play their quarterfinal match in Thursday night’s match. 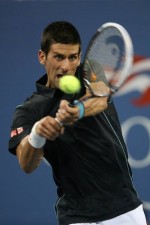 usopen.org: September 5, 2013 by Nicholas McCarvel - Perhaps it was a good thing Novak Djokovic lost a set on Thursday night at the US Open – though he probably wouldn’t agree with that statement. The world No. 1 was tested for the first time at the USTA Billie Jean King National Tennis Center in a quarterfinal clash with Russian Mikhail Youzhny, but the 2011 champion won going away, recording a 6-3, 6-2, 3-6, 6-0 victory. Even if his evening wasn’t unblemished, the Serbian maintained a perfect record in the quarterfinals in New York, now 7-0. On Saturday, he takes on Stanislas Wawrinka, the Swiss man who shocked defending champion Andy Murray in the day’s earlier encounter. After Djokovic coasted to his 13th and 14th consecutive sets of the 2013 tournament, things got sticky in set three as the No. 21 seed jumpstarted a dazzling display of speed and shot-making. Full article 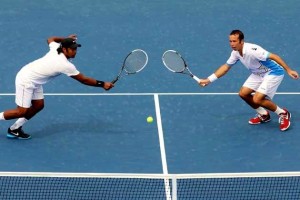 usopen.org:  September 5, 2013 by Erin Bruehl - After dominating the first set, in which they lost just one point on serve, the world No. 1 doubles team of Bob and Mike Bryan lost, 3-6, 6-3, 6-4, to Leander Paes and Radek Stepanek, ending their bid to become the first men’s doubles team in the Open era to win the calendar-year Grand Slam. With their record 15th Grand Slam title at Wimbledon in July, the Bryans became the first men’s doubles team ever to hold all four Grand Slam titles plus the Olympic title simultaneously, dating back to the 2012 London Olympics and their 2012 US Open title.

“We’re very disappointed,” Bob Bryan said after the loss. “As competitors we hate to lose, and we knew what was riding on this match and the opportunity of what we could have accomplished. All this Grand Slam talk has been in the back of our heads, and it’s been an honor to be part of this run with Mike. It’s been a great 12 months. Today all the luck that’s been on our side went against us. Those guys played a great match.”

Paes and Stepanek credited the Bryans, knowing how much they have accomplished for doubles, but were happy to be back into the final and with their comeback. “I have tremendous respect for the boys," Paes said. "They are great champions, great ambassadors for the game. What they have done this year is something really special. In one context, going out there to play today we knew we were playing for our year. We’ve got a little bit more work to do this week, but I’m very proud of the partner I share the court with.” Full article