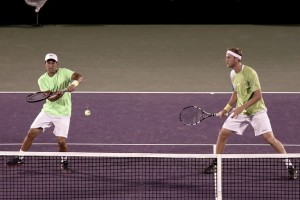 September 04 2013 ITS Staff: New York - Philippines’s Treat Huey and Dominic Inglot of Great Britain were denied a spot at a Grand Slam Final Four on Wednesday bowing out to Wimbledon finalists Carmelo Melo of Brazil and Croatia’s Ivan Dodig 7-5 6-3 played at the Louis Armstrong Stadium.

With both teams holding serves in the first 10 games, the sixteenth seeds Huey and Inglot held a 0-30 5-5 advantage on Melo’s serve. The Filipno-British duo were unable to put pressure squandering two consecutive returns without making Melo execute a volley. After solid first serves, Melo and Dodig went ahead for a 6-5 lead before clinching the first set after the Filipino Davis Cup star, who was serving against the difficult end of the court facing the sun amid unpredictable gusty winds, served two double faults in the crucial twelfth game.

In the second set, Melo and Dodig stormed to a 5-1 commanding lead but the former University of Virginia Cavalier college stars held and broke back to narrow the gap at 5-3. With Huey serving to stay in the match, Melo and Dodig dug deeper into their arsenal clinching the match on the second match-point with a down-the-line pass to advance one-step closer to their second straight Grand Slam final.

Huey and Inglot came into the quarter-finals with victories over No.3 seed Spaniards Marcel Granollers and Marc Lopez, the 2012 ATP World Tour Doubles champions, 7-6(2) 6-0 in the round of 16; Italy’s Daniele Bracciali and Czech Lukas Dlouhy 6-3 6-3 in the second round; and Austrian pair of Julian Knowle and Jurgen Melzer, last week’s Winston-Salem Open singles winner, 6-2 6-7(4) 7-6(5) in the first round. Huey and Inglot reached both the French Open and Wimbledon Round of 16s this season.

No.1 Ruben Gonzales and Treat Huey eye a Group 1 promotion vs the Kiwis. Photo courtesy of Roland Kraut

Philippine Tennis Association Vice-President Randy Villanueva announced Tuesday Treat Huey will lead the Philippine Davis Cup team along with Ruben Gonzales, Johnny Arcilla and Francis Casey Alcantara against New Zealand on Sept. 13 to 15 at Plantation Bay Spa and Resort in Lapu-Lapu City. The Philippines defeated Thailand, 4-1 last April that put the Filipino team to the final of the Asia Oceania Group 2. Winner will get promoted to elite Group 1 next year.