It's the first time the Swiss Maestro won't reach a single Grand Slam final in a calendar since 2002. 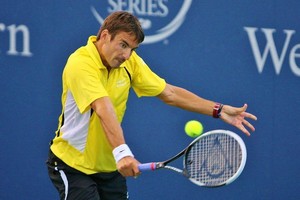 usopen.org: September 2, 2013 By Neil Schlecht: New York - In a round of 16 match pushed by rain to Louis Armstrong Stadium, Tommy Robredo of Spain, the 31-year-old No. 19 seed, shocked the five-time US Open champion Roger Federer, 7-6, 6-3, 6-4. The victory by Robredo dashes any hope for New York fans eager for a potential matchup between Federer and No. 2 Rafael Nadal, an encounter that has never happened at the US Open throughout their long and storied rivalry. Robredo and Federer have played each often over the past 11 years. But unlike his countryman Nadal, Robredo had never beaten Federer in 10 encounters. In fact, Robredo had won just three sets of the 27 they had played. Monday evening, he doubled that total.

On Labor Day in the United States, little was working for Federer. In brutally humid and heavy conditions, the Swiss great shanked and sprayed forehands, committing 45 unforced errors and generally looking every bit as unsettled as the weather had been all day. “I don’t believe what I’m seeing,” said another multi-time US Open men's champion, John McEnroe, providing color commentary on ESPN2. Even Robredo was surprised. “I wasn't thinking that I was going to win,” he admitted. “I just was going into the court trying to give my best and we'll see, no?”

“I struggled throughout, which is not very satisfying,” admitted Federer. “I mean, Tommy did a good job to keep the ball in play and make it difficult for me today. I missed so many opportunities. Rhythm was off. I kind of feel like I beat myself, you know, without taking any credit away from Tommy."

Although Federer was unable to summon anything remotely resembling his best tennis, Robredo met the occasion with some of his best play in many years. The Spaniard rifled forehand winners, varied his return stance to throw Federer out of his rhythm, and converted on four of seven break-point opportunities. Full article 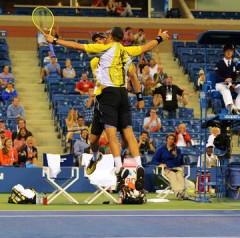 Bob and Mike Bryan moved one step closer to winning a calendar year Grand Slam after advancing to the semi-finals on Monday with a 7-6 6-4 victory over Colin Fleming and Jonathan Marray . The twins are now only two wins away from making history as the first team to win a calendar-year Grand Slam and Olympic gold. They will face the winner between Leander Paes/Radek Stepanek and Jean-Julien Rojer/Aisam-Ul-Haq Qureshi.

Philippines’s Treat Huey and Dominic Inglot of Great Britain, No.16 seeds upset the No.3 seed Spaniards Marcel Granollers and Marc Lopez  7-6(2) 6-0 to enter the quarter-finals for the team’s first appearance in a Grand Slam against Marcelo Melo of Brazil and Croatia’s Ivan Dodig for a place in the semi-finals. Melo and Dodig, this year’s Wimbledon finalists to the Bryans, defeated Sergiy Stakhovsky of Ukraine and Russian Mikhail Youzhny 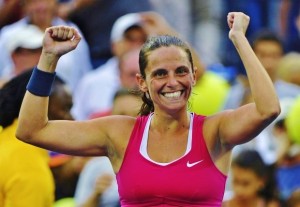 September 02 2013 ITS Staff: New York - Roberta Vinci of Italy is the first entrant to appear in the quarter-finals of the U.S. Open Championships on Labor Day Monday minutes before rain suspended play at the Billie Jean King National Tennis Center.

The tenth-seed came up with a 6-4 6-2 victory over fellow Italian Camila Giorgi entered the last 16 stunning No. 6 Caroline Wozniacki in three-sets.

The heavy hitting 21-year old Giorgi stormed to a lead in the first set but eventually was out-smarted by the more experienced 30 year old Vinci who made her work for every point. Giorgi committed 37 unforced errors including 7 double faults and was broken four times in the one hour and 7 minute match. 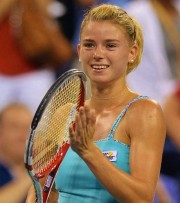 The No.136 ranked Giorgi, whose parents hail from La Plata in Argentina, born in Macerata, Italy but now reside in Miami, Florida, defeated former World No.1 Wozniacki 4-6, 6-4, 6-3 in the third round playing her first-ever match on Arthur Ashe Stadium.

Vinci, who holds the World No.1 Doubles ranking, now appears in her second consecutive U.S. Open singles quarterfinal where she will meet either another Italian Flavia Pennetta or red-hot Romanian Simona Halep who is one of the hottest players on tour with four WTA titles since June. Pennetta was up a set 6-2 and a 4-2 lead but Halep came back and is now ahead with a set-point at 40-30 5-4 in the second set before rain interrupted the match.